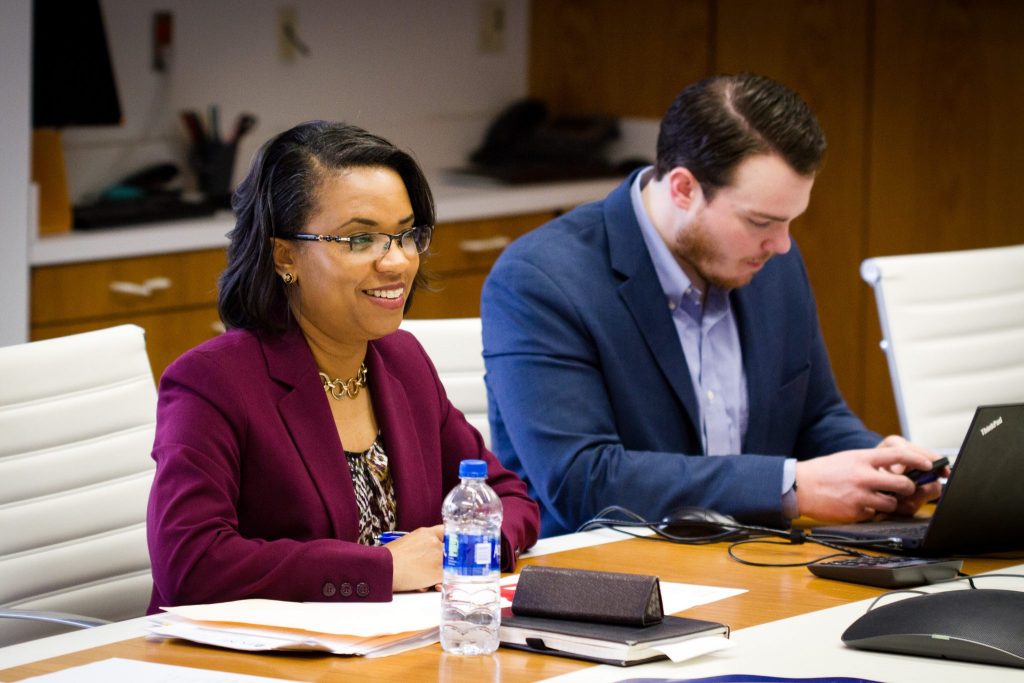 ECSU Interim Chancellor, Dr. Karrie Dixon, seen here during a past New Directions: Phase 2 Working Group meeting, presented a list of accomplishments generated by the group over the past eight months during its final meeting Wednesday, June 27. Although Wednesday marked the final meeting, Dixon stressed that the work to building a stronger and better ECSU is ongoing.

The Phase 2 Working Group was organized last October by UNC System President Margaret Spellings. Dixon, then the System Vice President of Student and Academic Affairs, joined now-retired Chancellor Thomas Conway to lead the group that, in Spellings’ words, would be charged with, “putting in place permanent and significant improvements in operations and processes that will provide a stable operational platform for the future of ECSU.”

The working group, along with a separate operational team charged with identifying needed change at ECSU, has worked over the past eight months on a number of projects and issues aimed at placing the university on a firm foundation. The focus has ranged from enrollment issues to personnel, to campus infrastructure.

Dixon said one of the big highlights of the past eight months has been the increase in enrollment, and interest in ECSU overall. With the help of the NC Promise Tuition Program and the work of the enrollment and admissions office, freshman enrollment has increased and the university’s out-of-state visibility is dramatically on the rise as well.

“So we are attracting students who may have other options,” said Dixon.

Another big spike in numbers comes from out-of-state enrollment, specifically from the nearby Tidewater, Virginia area. Dixon says current data shows that confirmed freshman from the region has increased by 195 percent.

Aside from the Working Group, an operations team was tasked with identifying needs across the campus. The team identified 65 projects, of which 49 have been completed. The remaining 16 projects are currently a work in progress.

“This is just a point of reference to say this is what we have accomplished over eight months,” said Dixon. “We have more to do.

The 65 projects listed by the operations team include “student facing facilities and grounds improvement,” personnel, and business process improvements.

Some of those projects include new landscaping around the Thorpe Administration building, student common areas outside of residential halls, and a new entrance located adjacent to the Gilchrist building.

“We want our students to live and love where they learn,” said Dixon.

Some of the other high-profile beautification projects happening around campus include new Viking royal blue paint and university logos on the walls in the Thorpe building; new furniture in the administration and financial aid lobby; new paint and furniture in the cafeteria; and the bowling alley renovation – due to be complete mid-July.

“When you come onto a campus, any prospective student is going to stop and see if this is a place they want to be,” said Dixon, referencing the work on the new main entrance.

Other key projects have focused on personnel. Dixon outlined a list of new hires and new appointments. New hires to be announced in the near future are Vice Chancellor of Student Affairs, Athletic Director, and Director of Admissions.

Dixon said there has not been a Director of Admissions at ECSU for the past 10 years.

Appointments within the university include naming Dr. Derrick Wilkins the university Chief of Staff, and university General Counsel Alyn Goodson also takes on the role of Chief Operations Officer.

While the working group will not formerly meet after Wednesday, Dixon said there are “next steps” in the evolution of ECSU. Those next steps include the need for a new university library; a new campus master plan; card ID access system to improve security for dormitories, classrooms, and administrative facilities; and a campus-wide surveillance system.

Dixon asked that members of the group – representing both the UNC Board of Governors and ECSU Board of Trustees – continue to advocate for the university, recognizing that there are still needs that will require legislative funding for NC Promise marketing and system-wide repair and renovation needs.

James Cherry, the vice-chair for the ECSU National Alumni Association, praised the efforts of the working group, explaining that like other alumni, there was skepticism at first. Cherry said when the working group was formed, there were concerns over the direction the university might take in the coming months, but those concerns were put aside as the group’s efforts began to bear fruit.

“I am very pleased at the work that has been done,” said Cherry. “I just wanted to commend the working group for the work they have done.” 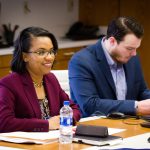