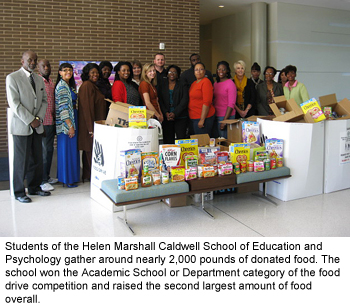 Elizabeth City State University is proud to announce a successful Feed the Need Food Drive. The drive, launched as part of a new Homecoming community involvement initative called Viking Impact Month, raised 10,810 pounds of food for the Food Bank of the Albemarle between September 20th and October 20th. Twenty-six campus groups participated in the drive and competed against one another to see who could raise the most food and funds. Participants had the option of giving money online rather than food items for every $1 donation, five pounds of food were credited towards the group of choice. Participating groups were divided into four categories: academic school or departments, administrative offices or divisions, clubs, boards, or affinity groups, and Greek organizations. The three groups that raised the largest amount of food, or equivalent in monetary donations, were the Chancellor’s Suite with 2,786 pounds, the Helen Marshal Caldwell School of Education and Psychology with 1, 985 pounds and WRVS 89.9 with 766 pounds. Together, these three groups raised almost half of the total 10, 810 pounds raised. Students in Free Enterprise raised the most food of any club, board or affinity group with 738 pounds, and Alpha Kappa Alpha Sorority raised more than any other Greek organization with 208 pounds. The Helen Marshal Caldwell School of Education and Psychology raised the largest quantity of actual food, with 90% of their donation being in the form of canned and nonperishable food items. Faculty and staff of the school engaged students to participate. Dr. Sandra Copeland, associate professor and coordinator for the Master of School Administration Program, requested each of her graduate students gather 50 items for the food drive. The students answered the call. By Friday, October 19th, they gathered nearly 2,000 pounds of food in the lobby of the Willie and Jacquelyn Gilchrist Education and Psychology Complex. The Food Bank of the Albemarle gathered food in nine counties and assisted in tracking the progress of the drive. &quotIt was the least we could do for a food drive of this magnitude,&quot stated Steve Murray, Resource Development Director, after presenting the winning groups with trophies during halftime at Saturday’s Homecoming football game. Executive Director Liz Reasoner thanked everyone who contributed. &quotWhat a great success the Feed the Need Food Drive has been. The ECSU community created a food drive that became the second largest to benefit the Food Bank of the Albemarle – quite an accomplishment for a first time event. We’re so pleased to have partnered with the ECSU community and the success of this event goes to show just how much we can accomplish through community partnerships.&quot For more information on the Food Bank of the Albemarle, please visit www.afoodbank.org . To view a complete list of food raised by participating groups, click here .