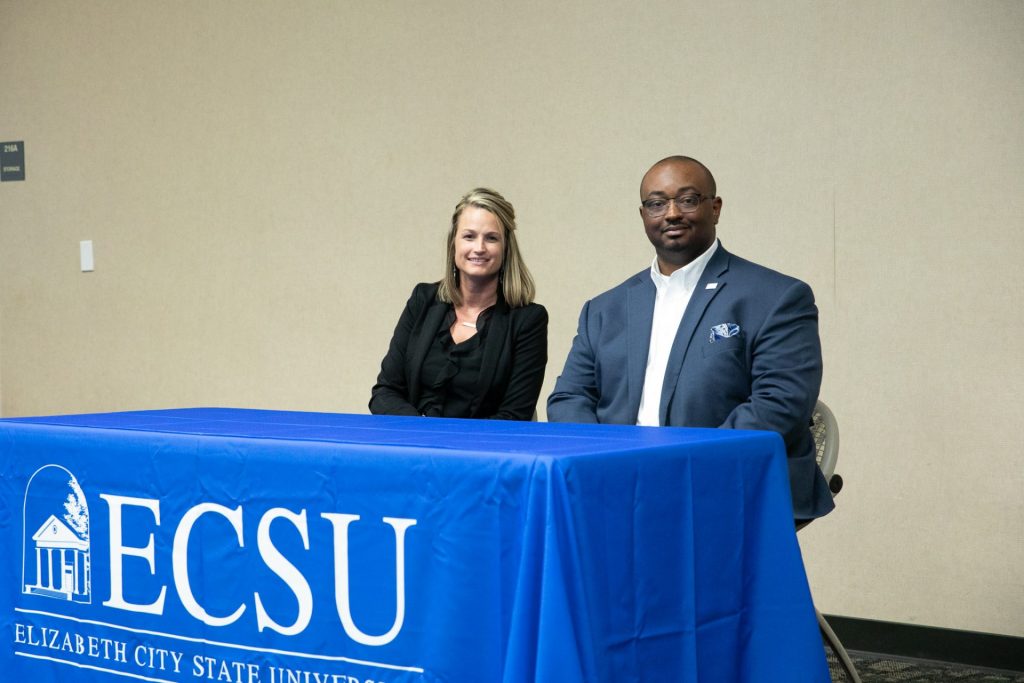 One of the greatest assets for any Elizabeth City State University student is the national network of alumni. That network of Vikings, say ECSU graduates, can make a difference in your future.

“I’ve always found a Viking somewhere that I can call on,” said A.L. Fleming, a 2006 ECSU graduate.

Mr. Fleming, along with 2001 graduate Wendy Pierce, were the keynote speakers during the Emerging Leaders Forum Thursday, Oct. 16. The forum was one of many events planned for students during Vikings Unleased ECSU Homecoming 2019.

Mr. Fleming is currently the vice president for institutional advancement at Albany State University in Georgia. He is an Edenton, North Carolina native.

Ms. Pierce is the development advisor for Sentara Albemarle Medical Center. She is a Perquimans County native.

Ms. Pierce said her exposure to ECSU was thanks, in part, to her geographic proximity to the university. As a biology major, she liked the program at ECSU and the fact that the university has a reputation for a “high quality education at an affordable price.”

Mr. Fleming said growing up in Edenton, he was exposed to a number of ECSU alumni. Those people, he said, helped him understand “the relevance of the university to the community.”

“When students and school officials came to our high school and talked, I liked what I heard,” he said of ECSU.

Mr. Fleming enrolled at the university and declared political science as his major. He was intent on going on to law school, but his student experience gave him other ideas.

Mr. Fleming was the first president of the student activities committee. He also did work study at the alumni relations office. Those experiences, and others, directed him to a future different from the one he had imagined.

“I saw how university advancement made a difference in students’ lives,” he said.

As a biology major, Ms. Pierce had an eye on the medical profession and education. She would work as an educator when ECSU partnered with the Elizabeth City community to launch Port Discover, a science center for children.

Her career path would lead her to non-profit work before she found her way to Sentara where she works in community relations and physician recruitment.

She says her time as a student at ECSU helped her identify opportunities. Both Ms. Pierce and Mr. Fleming told students that it is important to take advantage of their time at ECSU and explore opportunities.

Both alums also expressed the importance of reaching out to other people, and making connections while at ECSU.

“Collect more people,” said Mr. Fleming. “You can help each other.”

“There’s a good student-to-faculty ratio,” she said. “Use that to your advantage.”

Both agreed that their time as ECSU students helped shape who they are today. Mr. Fleming says having moved away from the region, he knows who he is, and what he’s worth, and he knows that his fellow Vikings are somewhere nearby when he needs to touch base with home.

According to ECSU’s director of alumni relations, Enoch Bond, there are more than 16,000 living ECSU alumni in the world today. 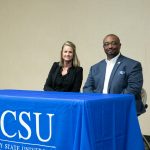