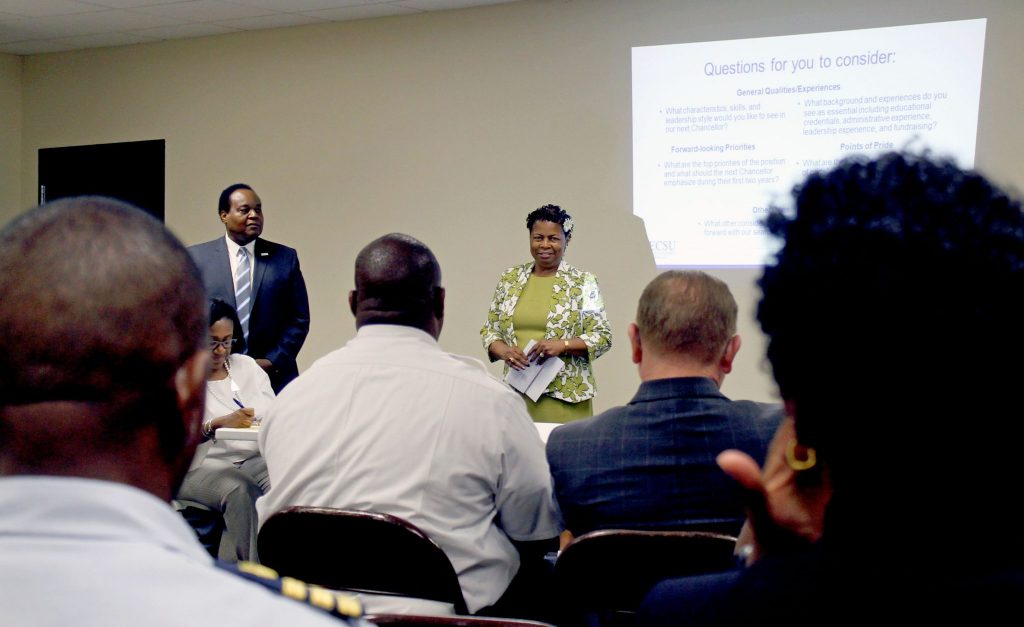 Elizabeth City mayor and ECSU alum, Bettie Parker, shares her thoughts on the choice of the university’s next chancellor. Parker and other community members gathered for a community forum hosted by the ECSU Chancellors Search Committee Wednesday, Aug. 29, at the Hugh Cale Center in Elizabeth City.

Just like the staff and faculty at Elizabeth City State University, Elizabeth City residents have ideas on what they want from the next university chancellor.

A series of community forums are taking place, all of them designed to give people an opportunity to voice their thoughts on the characteristics of the next ECSU chancellor. In Elizabeth City, residents showed up for the first of two town forums Wednesday, Aug. 29, at the Hugh Cale Center on Road Street.

Hosted by the chair of the ECSU chancellor’s search committee, Harold Barnes, the public took the opportunity to share with the committee its hopes for the next chief officer.

“I would like to see the chancellor be open minded and will follow the policies of the system,” said Elizabeth City council member and ECSU alum, Johnny Walton.

Walton said he is looking for a chief officer that will take information and use it to form a vision. And with that vision, he said, he hopes the next chancellor will take the opportunity to lead the university to greatness.

“If the head doesn’t have a vision of greatness, you won’t find greatness,” he said.

Angie Wills said she’s invested a great deal of her life in ECSU not only as a student, but also as a former employee, and as the parent of a student. Wills said her experience at the university runs from former chancellors Dr. Jimmy Jenkins to Dr. Mickey Burnim.

“I remember strong, bold leadership and not being afraid to articulate a vision,” said Wills.

Wills says her hope is to see those same qualities in the next chancellor. And, she said, it’s her hope that the next university leader is a person who brings the community together and instills community pride in ECSU.

“Someone willing to make tough decisions,” she said.

Another ECSU alum, and Elizabeth City’s first female African-American mayor, Bettie Parker, said she sees change coming from the current ECSU administration and it’s a good thing. Parker said she would like to see the next chancellor not only continue the trend, but also embrace change.

“The university is crucial and we need to keep it an integral part of the community,” she said.

Earline Walton, also an ECSU graduate, said it’s important that the next chancellor be devoted and committed to students.

“Be visible on campus,” she said. “Be personally engaging with all the faculty and staff.”

According to Harold Barnes, the information gathered at the chancellor search forums is used to advise the search committee. The committee, he said, is operates in an advisory capacity.

The next Elizabeth City community forum will be held Tuesday, Sept. 4, 7 p.m. in the Twiford Room at Arts of the Albemarle in downtown Elizabeth City.

For more information on the chancellor’s search process go the Chancellors Search Page on the ECSU website. 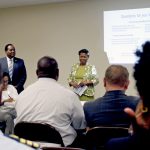