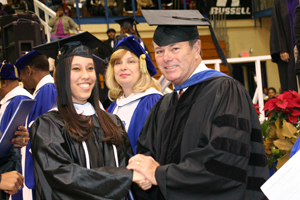 Mayor Steve Atkinson and the ECSU Board of Trustees congratulate Elizabeth City resident Elise Watts, an 18-year-old student who graduated from Elizabeth City State University with a bachelor’s degree in Political Science. Watts entered the university at the age of 15 and completed her degree requirements within 3 Â½ years. Watts was home schooled by her mother, now City Councilwoman Volanda Watts, before she entered ECSU.