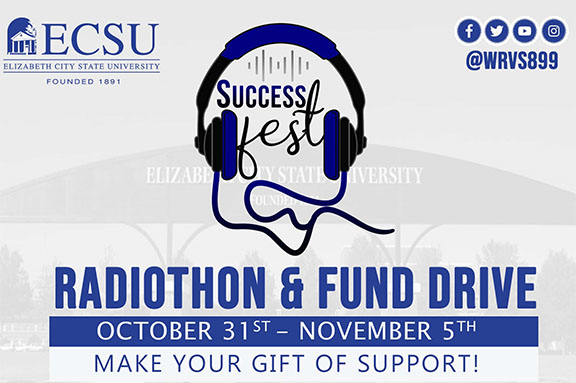 Elizabeth City State University’s public radio station, WRVS 89.9 FM, is making waves over the air this week with its SuccessFest 2021 Fall Membership Drive. The biannual membership campaign and week-long radiothon kicked off on Sunday, Oct. 31 with no tricks, only treats.

According to ECSU’s director of radio and television services, Melba Smith, the biannual fundraising campaign aims to raise $10,000. While the membership drive and radiothon runs through Friday, Nov. 5, year-long giving is welcome and encouraged.

“Donations from our listenership and community base is so important because its helps WRVS remain eligible for grant funding from the Corporation for Public Broadcasting (CPB) which allows us to give back to the community with specialized programming and many other resources,” said Ms. Smith. With continued funding support, WRVS also has plans to produce and present local news regularly.

WRVS is the only broadcast facility locally providing programming such as NPR and original programs including “Conversations with the Chancellor,” “Around the Town with Hez Brown,” “High School Game of the Week,” and more. The station has been a service to Northeastern North Carolina and Southeastern Virginia for over 35 years.

WRVS trains high school and college students interested in pursuing careers in radio broadcasting. The station has been a training ground for many ECSU students who now work in the industry as skilled broadcasters and professionals at renowned media organizations around the country.

In 1990, the station received several upgrades, including a new transmitter allowing an effective radiated power of 41 kW as well as a new frequency of 89.9 MHz. On July 3, 1996, the station went dark for weeks due to water and smoke damage to equipment caused by an electrical fire that occurred upstairs in Williams Hall. The station signed back on in October and later went to a jazz-based format as “Jazzy 89-Nine.”

In 2003, the station reverted to its original and current Urban Adult Contemporary based format and then moved from an 18-hour format to broadcasting 24 hours a day. On Sept. 25, 2008, WRVS-FM, 89.9 completed its digital conversion and on Sept. 28, 2008, launched its digital broadcasting stream using iBiquity Digital Corporation’s HD Radio TM technology.

In August 2020, WRVS gave new life to its previous format by announcing the launch of Jazzy 89.9, a new radio station featuring jazz music through its HD2 signal. The station extended its jazz offerings on WRVS-FM to give listeners a 24/7 platform.  A complete schedule of featured shows is available at www.ecsu.edu/wrvs. 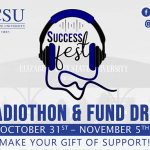