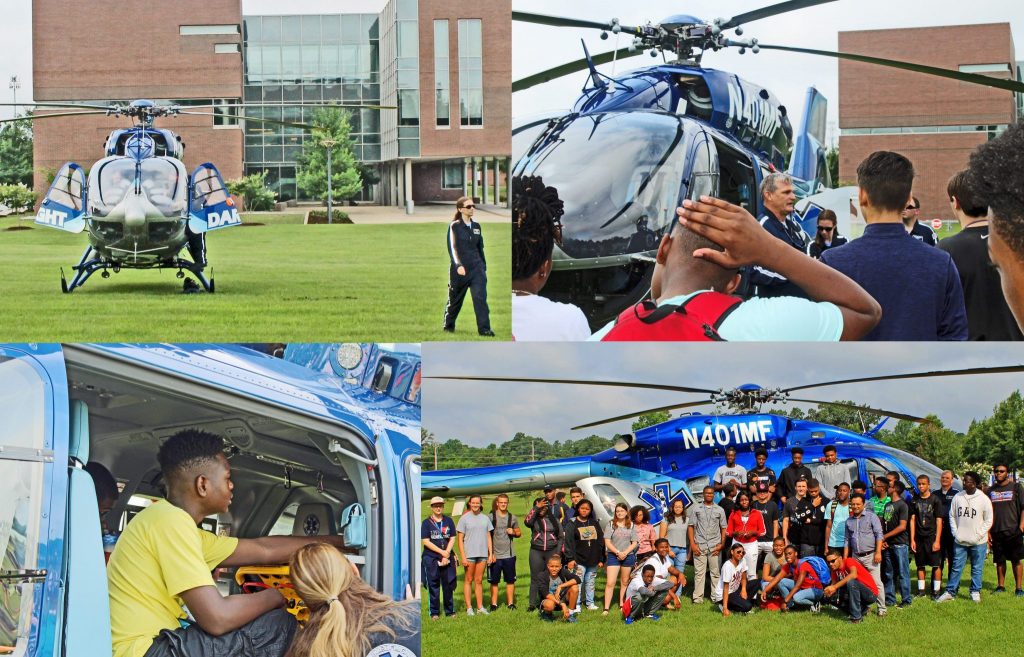 When the Dare County Medflight helicopter touched down on the lawn adjacent to Elizabeth City State University’s Fine Arts Center, paramedic Ashley Heppert stepped out, followed by pilot Mike Hill. As the rotary blades of the helicopter slowed to a halt, about 40 high school students gathered around to listen as Hill talked about the aircraft.

“This is a helicopter, not an air ambulance,” Hill, a former military pilot explained. He went on to describe the engine, the fuel capacity, and the significance of the craft in terms of aerospace technology. His talk was aimed at enlightening the participants in ECSU’s second NASA Aerospace Academy.

Each summer two camps are held on the campus of ECSU. Aviation program director, Dr. Kuldeep Rawat, says while the NASA-sponsored camp has been taking place for two years, the camp’s origins go back seven years when it was dubbed the ACE Academy – ACE stands for Aviation Career Education.

Monday, June 18, was the first day of the weeklong camp. That was the day the helicopter stopped at ECSU. The campers were able to scramble around the aircraft for photos, climb inside to inspect the cockpit, and ask the crew questions.

The campers are encouraged to ask questions about aviation. They’re encouraged to deepen their understanding of STEM-related careers. That’s what the camp does; bring students who have expressed an interest in STEM careers closer to their interests.

Rawat says there are two sessions, this one and one in July. In total 88 campers will experience hands-on activities such as building hydrogen car models.

He says the camp participants learn about the principles of hydrogen fuel through building the model.

“How to use the technology and implement it into the models,” he said.

On another day the students will learn about flight by sharing the cockpit with some of ECSU’s Certified Flight Instructors. They will take off in one of the university’s six planes and experience aviation first-hand.

On Thursday, June 21, hot air balloons will be introduced to the program for the first time. At 6:30 a.m. campers will be met by a balloon and its pilot, learn about the principles of balloon flight, and then take a ride.

It would seem that such an experience would cost campers and their families something, but this weeklong exploration of aviation is free, says Rawat. Grants from NASA, the Golden LEAF Foundation, Burroughs Wellcome Fund, the North Carolina Department of Transportation and the N.C. Space Grant Consortium make it all possible for these future aviators and scientists.

Rawat says students simply apply and those that meet the criteria will be chosen for a spot in the camp.

Although campers come from across the state, and even out of state, most of the participants come from one of the 21 eastern North Carolina counties served by ECSU, says Rawat. He says the program strives to balance the program between equal numbers of young men and young women. Minority students, he said, are given special emphasis as well.

“More than 70 percent are minority students, and 50 percent are females,” said Rawat, adding that 85 percent of the campers are from the 21 county region.

In addition, ECSU has partnered with the Northeast Academy for Aerospace and Advanced Technologies, the local charter school, to bring middle school students into the program. There are four sessions working with 120 of their students, placing a concentration on robotics.

Since the NASA program brings in high school students, it would stand to reason that many of them may choose to enroll at ECSU later down the line. Rawat says that part of his grant is to do research on where the students go to school and what subjects they choose for majors, and he’ll know more about the results later in the year.

In the meantime, he says there are some former campers on campus as ECSU students. 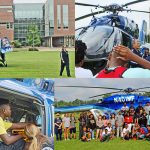