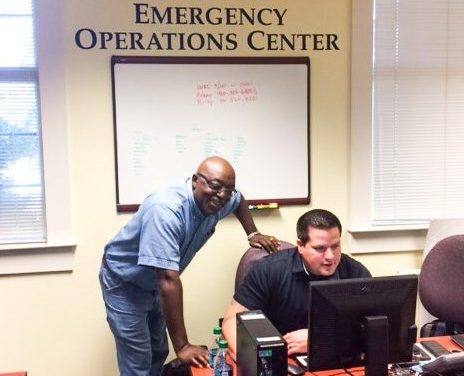 ECSU’s emergency management director Rickey Freeman, left, was a part of the University of North Carolina at Wilmington’s post-hurricane recovery team. Damage to the coastal campus was extensive, said Freeman.

Elizabeth City State University was spared the wrath of Hurricane Florence, but our sister institution, the University of North Carolina at Wilmington, was not so lucky. However, thanks to a UNC System mutual aid agreement, ECSU’s emergency management director, Rickey Freeman, became part of a recovery team that was responsible for getting the coastal campus back on line.

“I was the logistics officer,” said Freeman. “That means I was in charge of securing resources, supplies, any type of logistical needs. Supplies, vendors to help clean up; any type of need they have to help recover.”

Freeman said a team that consisted of emergency management professionals from ECSU, UNC-Greensboro and Appalachian State University worked with UNC-W’s emergency management team on the recovery. And while there will be plenty of work to do in the days ahead, the work that Freeman contributed to will allow the university to bring students back on campus Oct. 6, with classes starting again on Oct. 8.

On Sept. 14, Hurricane Florence made landfall south of Wrightsville Beach, near Wilmington. Wind and water damage was extensive across North Carolina, and the campus of UNC-W took a major hit in the storm, said Freeman.

“They had extensive damage,” said Freeman, who returned from Wilmington last week. “Everything from water damage to wind damage. There were an estimated 150 trees down. They were still cutting trees when I left.”

Perhaps the most intense damage, however, was done to campus buildings and the football stadim. Two buildings, the campus’s largest residence hall and the science research facility, were badly damaged first by wind and then rain.

Freeman said on both buildings, the wind ripped the roofs off and water poured in, drenching the facilities to an estimated $50 million in damage.

In the early days of tracking Hurricane Florence, Elizabeth City and the northeastern corner of the state were in the path of what began as a category four storm. As the track of the storm came closer to landfall, it shifted enough to avoid the region, and ECSU.

However, ECSU was prepared for the storm. Freeman and the university’s emergency management team worked to prepare the campus, evacuate students, safely house students who could not leave, and ready for the potential recovery that would follow damaging winds and rain.

Freeman said had Elizabeth City been hit with the same ferocity as Wilmington, the region and campus would likely have seem very similar results and ECSU would still be in the throes of recovery.

“Recovery is a huge undertaking,” he said.

And while no one looks forward to lessons taught by the likes of Hurricane Florence, Freeman says there are take-aways from this storm that will help ECSU and other campuses better prepare for when, not if, one day a hurricane makes landfall here.

“You always need to have discussions prior to the events,” he said. “One of the big things is people forget that even when the wind and rain stop, we have so many other areas of concern. How will you do your re-entry? And you have to think about those students that cannot go home, making them safe. And academic rescheduling and meeting SACS guidelines.”

Freeman says that plans for these concerns are in place at ECSU, but it’s something that requires at least an annual review and discussion.

In the meantime, UNC System schools continue to send crews to Wilmington. Freeman doesn’t know if he will need to return to the campus for more work there, but if he’s needed, they can count on ECSU. 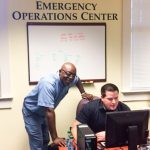