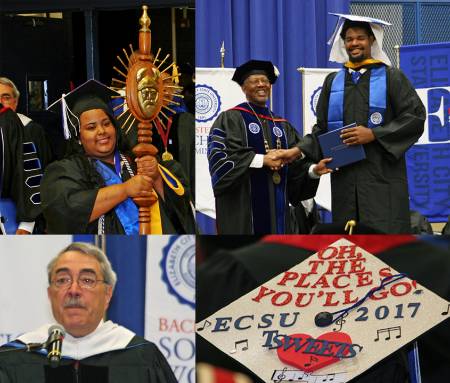 On Saturday May 13 2017 159 Elizabeth City State University students walked across the stage at the R. L. Vaughan Center receiving diplomas and celebrating not only their education but their experience as members of the Viking community. It was the 164th ECSU commencement ceremony.

Student Government Association President Ajanae Willis stirred the crowd of graduates students family and friends with a greeting not only designed to celebrate the day but also inspire graduates to go forward and be agents of change.

Willis a history major from Fayetteville North Carolina brought to light the issues of mass incarceration the sexualization of women in popular culture and the need to stand up and be counted among those who will be a positive force for change in the culture.

“You have not overcome us in fact we have overcome you” Willis said pointing at what she describes as an “oppressive” system.

Willis’s speech was met by roaring applause. Chancellor Thomas Conway when he took the podium to introduce the keynote speaker U.S. Rep. G.K. Butterfield observed that it was because of motivated students like Willis that he wanted his job as ECSU chancellor.

Butterfield a native of Wilson North Carolina in his speech urged students to “have faith.” He said have faith in God family and your school. Now that you have graduated he said be a leader in your alma mater and be a positive influence for future ECSU Vikings.

He also encouraged students to use their education to positive ends. In the world he observed there are many issues such as poverty and discrimination.

Students he said cannot ignore these issues. Their education he said has prepared them for a life of service in whatever field of endeavor they pursue.

Many students such as Willis will go on to earn graduate degrees while others will go on to seek careers. Whatever they choose at this point in their lives Butterfield celebrated their efforts and observed that ECSU has been through a great deal throughout its 126 year history and “is alive and well and deserves to be preserved.” 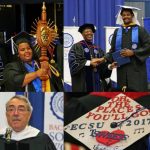