0
506 Views
Warning: json_decode() expects parameter 1 to be string, object given in /srv/users/serverpilot/apps/ecsunewsroom/public/wp-content/plugins/posts-social-shares-count/classes/share.count.php on line 66
0
Shares

Edward Colson will tell you, he never figured he would travel abroad, seeing foreign lands, meeting foreign people, and experiencing new cultures such as those he experienced this past summer. But he will also tell you that being an Elizabeth City State University student changed all of that.

Last summer, the ECSU senior traveled to Bulgaria and Greece with several other students, under the guidance of the director of the University concert choir, music professor Dr. Walter Swan, to perform and tour just a small part of Eastern Europe.

“I couldn’t imagine traveling outside of the country so I never even thought about applying for a passport,” said Colson, 26, an ECSU sociology major.

Colson grew up in rural eastern North Carolina. When he arrived at ECSU, he recalls not knowing a soul, but someone suggested he think about the University concert choir as a way to get involved in campus life outside of classes.

“I wasn’t sure at first,” Colson said of auditioning for the choir. But he had experience singing in choirs as a boy. So being new to the ECSU campus, and realizing that he would need something more than class and study time, Colson went to his audition.

“I thought it would be something that would get me out of my room,” recalled Colson. “So I signed up with the choir. It’s been a learning experience.”

Under the direction of Dr. Swan, Colson and other students have learned to sing classical choral pieces, sing in foreign languages, and be a part of something which requires not only commitment, but also a willingness to learn new things. Colson’s willingness, and his desire to learn, landed him an invitation to join Dr. Swan on a tour which included not only the professor’s performances, but also students.

Dr. Swan performed as a soloist with the Greenwich Choral Society. Colson and his fellow students performed with the choir, an experience that he said was, “really cool.”

But it was the experience of immersing himself in other cultures for the first time that made what Colson describes as a lasting impact on him.

“The experience has taught me that there is so much out there and there are so many people not only in the U.S., but other countries that want to learn,” Colson said. “It was something that you would have to experience, walking the roads and viewing it as a tourist and observing the interaction of the people.”

Colson said he toured a number of museums, walked along the Aegean and Black Seas, and did a whole lot of people watching. Over all, he says the experience opened his eyes to more possibilities in life.

“It really allowed me to learn more than words can express,” he said. “It has motivated me to be a better person, to be aware of myself, of my peers, and aware of my professors. It has given me a chance to realize that there is more to life.”

Colson says this experience has sparked a strong desire in him to travel more in the future. But in the present, however, there is plenty of work to be done.

After Colson graduates from ECSU in the spring, he will go on to earn a graduate degree in divinity and hopes to teach at a university level. And singing, he says, is not out of the question, either.

“If I can balance working, going to grad school, and possibly singing, then I think I’ll give it a try,” he said. 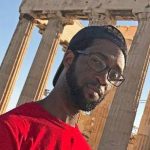