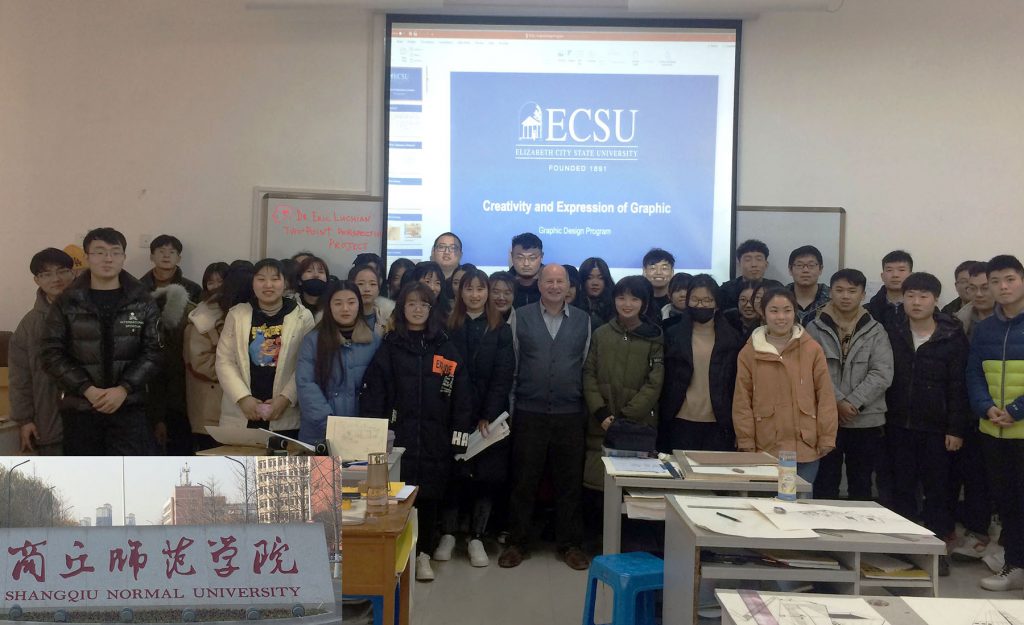 Visual arts professors John Stiles and Dr. Eric Luchian couldn’t be found at home enjoying some down time over the holiday break. Instead, the two Elizabeth City State University professors of graphic design journeyed across the globe to China where they taught classes at Shangqui Normal University, in the city of Shangqui in the Henan Province.

“This was my second trip to China and Eric’s first,” said Mr. Stiles. “We taught classes for two weeks while there.”

For two weeks Mr. Stiles and Dr. Luchian braved the spoken language barrier, relying heavily on the visual language of their profession, and what Mr. Stiles recalls as an earnest desire on the part of students to learn.

“Classes, even studio classes, are much larger than ours,” said Dr. Luchian. “Shanqui Normal University is about 20 times larger than ECSU. Classes are spread out throughout the entire day in blocks of four hours.”

Mr. Stiles recalled that during his first trip teaching in China, he was “blessed to have an interpreter.” This trip, however, while they were promised interpreters, both ECSU professors had to wing it without one.

“You learn to improvise when teaching in China by talking as slow as possible, using as many visual aids as I can, and employing my students in helping me,” said Mr. Stiles. “Hopefully I was able to deliver successful lessons.”

Mr. Stiles said that his lesson plan was “heavy on typographic hierarchy and designing on the grid, which applies to all visual media outlets,” he explained. So despite the language barrier, and given the visual nature of the coursework, he went forward with his lesson plan.

In the classroom, Dr. Luchian became concerned when students were not asking questions. It was difficult, he said, to know whether or not the students were getting a feel for the course material.

“At a point, I was getting confused,” he said. “No questions? How come? Ask me something as I do not know how I am doing or what you are interested in.”

Mr. Stiles has also experienced the lack of questions in the classroom. He observed that it didn’t seem that students are taught “critical thinking,” and it seemed that perhaps they were used to being “taught at, for lack of a better term.”

Both professors agree that Chinese students are very dedicated and eager to learn. While much of what they learn is through rote memorization, they are attentive and dedicated.

Dr. Luchian and Mr. Stiles say that the students are good at working together and assist one another in times of need.

And if there was one cultural similarity between Chinese and American students, it may well be the use of the phone. Although, Mr. Stiles said, the Chinese students seem far more obsessed with their hand-held devices.

“I was told, the first time I was there,” recalled Mr. Stiles, “that they missed the original internet revolution as no one could afford computers. The economy has been booming in China now for years and almost everyone has a cell phone and access to the Internet. They just don’t know when to put them away.” 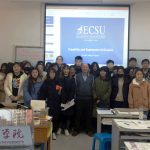