0
496 Views
Warning: json_decode() expects parameter 1 to be string, object given in /srv/users/serverpilot/apps/ecsunewsroom/public/wp-content/plugins/posts-social-shares-count/classes/share.count.php on line 66
0
Shares 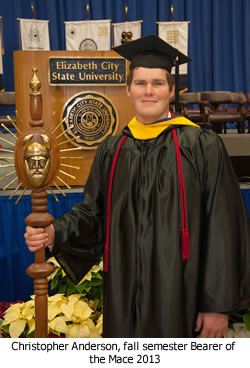 Elizabeth City State University held its 157th commencement for 230 graduates who can now deck the halls with framed degrees and photos. The December 14th ceremony at the R. L. Vaughan Center included 27 students who earned master’s degrees. Three of those master’s degrees were awarded for students who selected elementary education as their area of special interest, 14 for school administration, five for mathematics and five for biology. Those 27 graduate students marked the largest number to earn master’s degrees at ECSU since the university first began offering the advanced degrees in 2000. Dr. Paula Viltz, director of the graduate program at ECSU and interim dean of the Helen Marshall Caldwell School of Education and Psychology, said local public schools will benefit when these qualified master’s degree recipients return to the schools with additional knowledge and skills. At the ceremony, the master’s degree recipients were seated just ahead of the undergraduate student who had earned the highest grade point average – Christopher Anderson of Elizabeth City, N.C. The student who achieves that academic standing is declared Bearer of the Mace, the ceremonial symbol of authority. Anderson had the honor of holding the university Mace, a brass replica of the Viking head cast in bronze. According to ECSU tradition, he was the only student at the ceremony to be hooded on stage by the chairman of the Board of Trustees. In three and a half years, Anderson earned a bachelor’s degree in criminal justice and departed with a 3.88 grade point average. While attending ECSU, he also worked for local, small businesses and as a campus tutor. Anderson admits he attended few extracurricular, campus activities but he remained attentive to his classes. &quotI commuted to campus, but I didn’t feel detached from the college experience. Some friends who lived on campus kept me informed,&quot Anderson said. &quotThe professors were really personable, but college hit me like a brick wall. I had to work hard.&quot When asked what took him by surprise, Anderson recalled history and biology professors who made classes fun and interactive. He took summer school classes, which allowed him to finish early. Anderson, a Northeastern High School graduate, said he was stressed at times, especially while taking 17 credit hours in one semester. Yet, he would encourage other high school graduates who are ready for the challenge to enroll. &quotIt was nice to shape my class schedule around my personal schedule. Not everyone can go and finish college in three years, but you never know until you enroll. It will help you develop time management skills, and help you learn to handle responsibility- to place homework over play time. It was an honor to be the Bearer of the Mace.&quot Sisters Shenee Cuffie, sociology major, and Lekeisha Cuffie-Henry, a business administration major, also shared Commencement. They agree that time management is essential for success. Both were single mothers at one point while taking courses. Both stopped for a while to take care of their children. Cuffie-Henry eventually married and persuaded her husband to enroll. He and other family members were very supportive of her pursuit of a business degree. It was her dad, the late Greg Sampson, an on-air personality for the university radio station, WRVS FM 89.9, who repeatedly prompted her to finish her degree. She recalled the many times he picked up his grandchildren from school, babysat them, or made sure they ate dinner while his daughters finished evening classes. Sometimes, he allowed the kids to accompany him to the radio station so he could complete production work. Cuffie-Henry said he assured them finishing their degree programs was the most important task. If he or their grandmother was not available, the sisters would take turns picking up the kids from school. Sometimes, the kids sat in the rear of the classroom, a nearby lobby or the library finishing their own homework as the sisters attended class. &quotYou can’t beat family support. It is wonderful to have met this goal, but a bit sad because Greg wasn’t here to see it with the rest of the family,&quot Cuffie-Henry said. &quotI am so happy to see how proud my mother is.&quot &quotI am thankful for ECSU, a local institution. I am thankful for professors and staff who helped me, people who went far beyond the call of duty, beyond job requirements professors who answered questions whether I had an appointment or not. When you complete a degree in your 30s, you appreciate it more. You know how important it is.&quot