0
249 Views
Warning: json_decode() expects parameter 1 to be string, object given in /srv/users/serverpilot/apps/ecsunewsroom/public/wp-content/plugins/posts-social-shares-count/classes/share.count.php on line 66
0
Shares 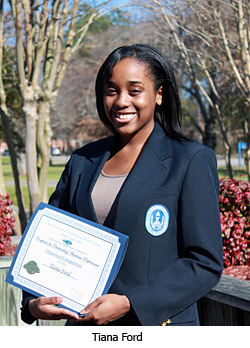 Kesha Williams
December 05, 2011 An Elizabeth City State University student and member of the Honors Program won second place in the oratorical segment of a national competition that brought together more than 300 honors program students at the 20th Annual National Association of African American Honors Programs.Tiana Ford, a junior from New Brunswick, N.J., majoring in business administration, won the award. The title of her speech, &quotTransforming Lives through Honors,&quot was based on the conference theme of the same title. Ford outlined four steps to help students honor the conference’s theme.&quotThe first step begins with us:&ampnbsp Look in the mirror and know there is nothing impossible for us to obtain or to achieve,&quot she said in her speech. &quotSecond, we must take advantage of resources we have as honors program students. Third, gain an in-depth insight of the world in which we live. Listen to major news sources instead of listening to our favorite music on the iPod. Engage in intellectual conversations instead of always using social media sites.&quot The fourth step, she said, is to form alliances with fellow honors program students.While attending the conference, students also met admissions representatives from graduate programs at universities across the country.Ford has been participating in the ECSU Honors Program since her sophomore year. She says the conference was enlightening and a great opportunity for participants to meet their peers.&quotIt was my first oratorical competition and it was a great opportunity to make a presentation publicly. I felt so proud to represent ECSU. It was also a great opportunity to learn what you are good at and what you are not,&quot Ford said.Other ECSU students who attended and participated in the quiz bowl were Winnie Harrell, a junior majoring in geology &ampnbspKanika Jones, a senior&ampnbspmajoring in computer science Shalisa Spence, a senior&ampnbspmajoring in English and Amanda Whittington, a senior&ampnbspmajoring in English.Jointly co-hosted by ECSU, Hampton University and Virginia State University, the conference was held Nov. 10 through 12 at Hampton University. It featured numerous academic activities, including competitions in the areas of debate, a quiz bowl, ‘Honors Got Talent,’ and oratorical contests. Additionally, students presented their research in the form of oral and poster presentations. The first event of the conference, &quotCity as Text,&quot led the attendees on a guided tour of historic downtown Hampton, Hampton University and a veterans’ cemetery.Honors Program directors Dr. Freddye Davy&ampnbspof Hampton University, Dr. Gladys Nunnally of Virginia State University and Dr. Velma Blackmon of ECSU planned the events and coordinated all activities, which also included a community service project organized by the student leadership of the organization. This year’s project involved visiting the Hampton Veterans’ Hospital and presenting cards and gifts to the residents on Veterans Day.The conference attracted students, advisors and directors from as far away as Langston University in Langston, Okla. Among the other schools represented were Florida A&ampampM University, Benedict College, Claflin University, Winston-Salem State University, Morris College, Norfolk State University and North Carolina Central University.Blackmon said the event is a wonderful experience for the participating students. She was delighted to bring an award back to campus and to see the quiz bowl team perform well.&quotWe were particularly proud of Ms. Ford’s second-place finish in the oratorical contest. I know she worked very hard on the topic and I feel that she represented herself, the Honors Program and ECSU very well,&quot Blackmon said.&quotWe appreciate the support of Chancellor (Willie) Gilchrist, and the administration, which provided assistance with transportation, time and effort. Serving as a co-host of this national conference is a great honor, and we tried to ensure that the effort represented the university well, while letting the attendees know that ECSU was an integral part of the planning,&quot she said.