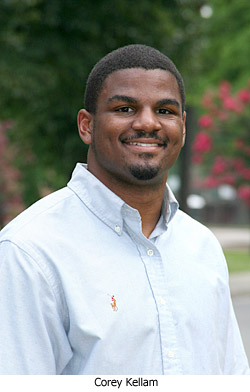 It’s understatement to say that Corey Kellam, an aviation science student from Chesapeake, Virginia, is going places. The list of U.S. cities visited will surely increase now that he’s earned his commercial pilot license. Back in the fall of 2011, Kellam was one of two students flying in the cockpit when the second ECSU airplane arrived in time for a Homecoming display. He was on site (Elizabeth City Regional Airport) when the first Cessna Skyhawk arrived in 2010. Over the years he completed his aviation science courses and continued accumulating flight hours as he moved toward this latest feat-a commercial pilot license. He is the first aviation science student to reach that goal. Before this month, he held a private license, which is a general, aviation license. The commercial license allows pilots to transport people or property for hire so Kellam is eager to share the friendly skies with passengers. &quotI was elated to receive my commercial license. This license will allow me to take friends and family on sightseeing trips. I could do some aerial photography too,&quot Kellam said. &quotThere are several places I would like to fly-cities in Florida and New York, Chicago or Los Angeles. Just knowing I can pilot the airplane to those places is so exciting.&quot This summer he is completing his certified flight certificate program which will allow him to teach others to fly. He shares descriptions of previous flights with curious students at ECSU and undergraduates in the aviation science program. Kellam is keeping his career options open. He’s considering flying for a commercial airline, an express mail service or the military. Kellam would have to earn the required number of flight hours to qualify for those types of career posts but looks forward to the future. For this young pilot, nothing compares to the peaceful hours spent in the sky. &quotI love seeing the scenery below the plane and seeing the cloud formations. Any time you are flying, you are likely to see things in a different light,&quot Kellam said. &quotIt’s good to travel at a speed that allows you to arrive faster than driving hours in a car. I like being able to fly anywhere I want to go.&quot Dr. Anthony Sharp, director of the ECSU Aviation Science Program, said Kellam is the first ECSU student to earn his commercial’s pilot. He entered the aviation science program in 2008. Sharp said regulations require a pilot to have 250 of flight time on record and the applicant must pass the Federal Aviation Administration’s commercial pilot’s license examination. This is a significant feat because a commercial pilot can earn income for flying an airplane. &quotEvery airline pilot has at least a commercial pilot’s license. Training involves obtaining a commercial pilot level of skill in handling the airplane. It requires a number of hours flying across country, the -skill to navigate from point A to point B,&quot Sharp said. &quotWe are proud of the progress our students are making in the aviation science program. Two of our former students have moved on and they are training to become pilots for the U.S. Coast Guard. I look forward to seeing what the other students here will achieve and I want area youths to realize they too can earn aviation science degrees at ECSU.&quot Next, Kellam will train to become a certified flight instructor. Afterwards, he will be qualified by the FAA to instruct others to fly so they can receive their private pilot certification. # # #