ECSU storm damage was minimal despite pounding by Hurricane Irene 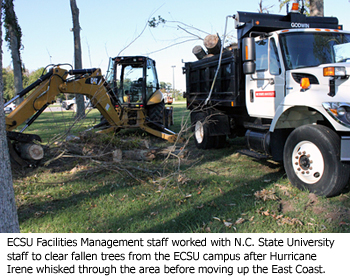 Fifty trees were damaged and two classrooms sustained water damage after Hurricane Irene whisked through campus on August 27-28. The storm spread debris, twigs and branches but caused little structural damage to university facilities. The cost of the storm to the university was estimated at $270,000.

Thanks to the help of 18 staff from North Carolina State University, downed trees were duly removed. Robert Gaines, special assistant to ECSU Chancellor Willie J. Gilchrist, said the crew from NCSU brought additional equipment — an aerial lift truck, forestry truck, backhoe, Bobcat, 12 chain saws, chippers and dump trucks — that was sorely needed. ECSU Facility Management staff worked diligently August 29 while the university was closed to remove as much of the storm debris as possible. When the help from N.C. State University arrived four days later, the fallen trees that remained were quickly cut up and removed.

&quotWith the help of the staff from North Carolina State University and use of their equipment we made a swift return to a normal schedule. There was no delay of our first football game either,&quot Gaines, said. &quotOur goal was to assure the safety of the campus for students, staff and faculty.&quot

Hurricane Irene may prove to be one of the costliest natural catastrophes in recent U.S. history, according to insurance industry analysts. Damage estimates of the deadly storm, which left a path of destruction as it swept the East Coast from North Carolina to Vermont, range from $7 billion to $10 billion.

ECSU storm damage was minimal despite pounding by Hurricane Irene