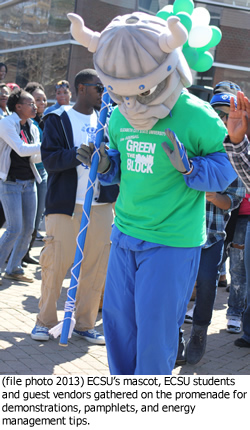 Felicia Davis, director of the Building Green Initiative at Clark Atlanta University, said that institution takes pride in housing this program for HBCUs. It shows minority serving institutions are willing to govern themselves on green projects.

&quot&quotFive years ago few HBCUs were looking in this direction, going green, but many are now supporting the initiative. To see them making headway is uplifting,&quot Ms. Davis said. &quotECSU was the first campus to sign the American College and University Presidents Climate Commitment. To see them ranked third shows how committed they were in going from good to great.&quot

Dr. Scott Bradshaw, director of sustainability, said this ranking is a wonderful indicator of ECSU’s commitment to the future.

&quotThis recognition really honors the work of so many ECSU students, faculty, and staff in making sustainability a priority, and encourages us to redouble our efforts as we work towards being carbon neutral by 2050.&quot

ECSU took several steps over the last five years to improve. The university contracted with Honeywell Corporation to identify energy enhancements in select buildings on campus. Campus-wide efforts such as the &quotGreen for All&quot and &quotGreen the Block&quot encouraged students to learn how their actions – recycling, purchasing organic products, understanding water quality differences, and installing energy-efficient light bulbs – can change the environmental destiny for themselves and surrounding communities in northeastern North Carolina.

The Building Green Initiative at Clark Atlanta University is one of many segments of society overseeing sustainability projects. It is linked to the Green Building Initiative (GBI) is a nonprofit organization whose mission is to accelerate the adoption of building practices that result in energy-efficient, healthier and environmentally sustainable buildings by promoting credible and practical green building approaches for commercial construction.

The GBI has benefited from the support of a core group of industries committed to advancing the green building movement by creating credible options for their mainstream builder customers. Organizations like the Wood Promotion Network, as well as interests from such sectors as financial services, retailers, wholesalers, appliance manufacturers and other building material providers have all stepped forward to support their efforts. – See more at: http://www.thegbi.org/about-gbi/#sthash.rUKa7xqM.dpuf