0
188 Views
Warning: json_decode() expects parameter 1 to be string, object given in /srv/users/serverpilot/apps/ecsunewsroom/public/wp-content/plugins/posts-social-shares-count/classes/share.count.php on line 66
0
Shares 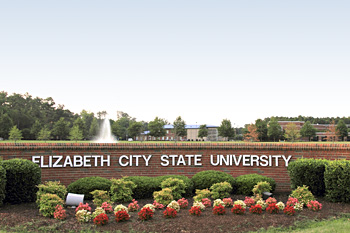 The US News and World Report’s 2012 Edition of Best Colleges rankings have been published and ECSU is again ranked as second in the Top Public Schools Regional Colleges (South) category. The Best Colleges report listed the university as #14 among the nation’s Historically Black Colleges and Universities–three notches higher than last year’s rank.

The Top Public Schools Regional Colleges (South) is one of four regions considered for this category. Other public colleges and universities are categorized by their location in the North, the Midwest and the West.&ampnbsp

The historically black colleges and universities (HBCU) were compared only with one another for these rankings. In order to be on the list, a school must be designated currently by the U.S. Department of Education as an HBCU. To qualify for the U.S. News ranking, an HBCU also must be an undergraduate baccalaureate-granting institution that enrolls primarily first year, first-time students and must be a school that is currently part of the 2012 Best Colleges rankings

US News sources made their decision about HBCUs by conducting peer surveys among the universities’ president, provost, admissions dean for answers to their questions. In addition to the survey results, the rankings were based on indicators used in the Best Colleges rankings for Regional Universities, weighed the same, based on retention and graduation rates to high school class standing and test scores and the strength of the faculty.

To be included in the Best Colleges rankings, a college or university must be regionally accredited and have a total enrollment of at least 200 students.&ampnbsp To rank colleges, U.S. News first places each school into a category based on its mission (research university or national liberal arts college) and-for universities offering a range of master’s programs and colleges focusing on undergraduate education at the bachelor’s level without a particular emphasis on the liberal arts-by location (North, South, Midwest, and West). National Universities where there is a focus on research and that offer several doctoral programs are ranked separately from National Liberal Arts Colleges, and Regional Universities and Regional Colleges are compared against other schools in the same group and region.

Second, US News gathers data from and about each school in 16 areas related to academic excellence. Each indicator is assigned a weight (expressed as a percentage) based on our judgments about which measures of quality matter most. Third, the colleges are ranked based on their composite weighted score. They publish the numeric rank of roughly the top three-fourths of schools in each of the 10 categories the remaining lowest ranked schools in each category are placed into the Second Tier, listed alphabetically, based on their overall score in their category.