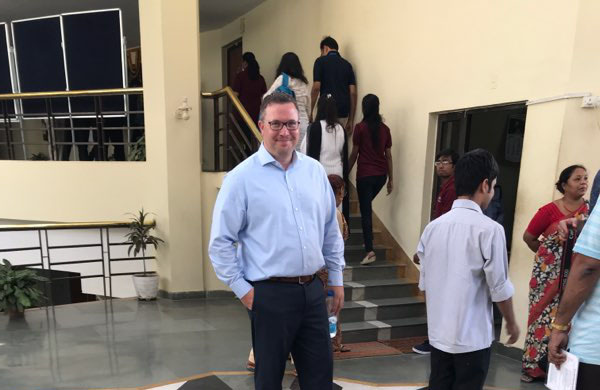 ECSU’s Dr. Timothy Goodale, seen here at a conference in India recently, is working on a National Science Foundation funded project to investigate the viral impacts on the cassava plant, a major food source in Africa.

The cassava plant is a drought-resistant food source for many people but a viral infection is threatening the much-needed crop. That’s where Elizabeth City State University’s Dr. Tim Goodale comes into the picture, working on a National Science Foundation (NSF) funded project to investigate the impacts on the plant in East Africa.

“Cassava is a crucial food crop during drought and when issues with the crop arise, millions of people struggle to subside,” said Dr. Goodale.

Dr. Goodale recently returned from India where he presented findings at the 2018 International Conference on Bioinformatics and Systems Biology. The research is part of a multi-university project, the NSF Partnerships in International Research and Education. Aside from ECSU, other universities include N.C. State, North Carolina A&T, and Auburn University.

“The diverse team of scientists and researchers is investigating causes and impacts of viral infections caused by white flies within the cassava plant in East Africa,” explained Dr. Goodale.

The NSF, he said, is funding the work, over five years with a $5 million award.

Dr. Goodale also heads up educational research efforts for K through 12 teacher training and undergraduate research opportunities. Most recently, he has authored a chapter for a research-based book due out in February.

The book, he says, details the current state of science teacher “content knowledge and attitude with respects towards evolution and genetics. In addition, Dr. Goodale has produced a curriculum for teacher professional development and high school science classrooms that uses, “alternative context-based approaches compared to the controversial traditional method that uses human origins as a means to teach evolution.”

“This in theory may be a way to improve teacher and student understanding of genetics and evolution and help better prepare them to be successful in STEM academic pathways in college,” he says. “My research background in general is STEM education in K through 16 contexts.” 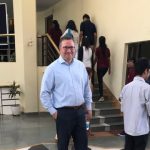