When Hurricane Harvey made landfall along the Texas coast, and up into Houston last month, Elizabeth City State University professor Kevin Kupietz was called to action as a part of a national task force. It’s what the ECSU emergency management professor does when he’s not teaching students.

“I’m part of the National Disaster Medical System,” said Kupietz. “It’s kind of like the National Guard. When disasters happen we’re called up to go for however long they tell us to go.”

By training and trade, Kupietz is a paramedic. And while the North Carolina native has been working either as a volunteer in Roanoke Rapids, or with the State Hazardous Material Team out of Williamston, when he’s not on the scene for hurricane relief, he’s been teaching. Before coming to ECSU, Kupietz was the director of the fire, EMS, and emergency management education programs at Halifax Community College.

As an assistant professor of the new Emergency Management degree program – it’s waiting for final approval from the SACS accrediting agency – Kupietz has been on the ECSU campus since August. And it was late August when he was called into action, and sent to Houston.

“We were called up on a Thursday night to be in the airport in Dallas by Friday,” said Kupietz. “We staged (relief efforts) in Dallas until Houston was safe.”

Kupietz and his team were then sent into the storm-ravaged city of Houston. He was posted at the Brown Center, the city’s convention center meant to serve as refuge for 5,000 evacuees, but housed 10,000.

“It was dark,” he recalled. “We started going down there at night. We had to turn back. What normally would have been a four hour (drive) turned into 12 hours.”

Kupietz says his convoy consistently came upon flooded roads, pushing them back to look for alternate routes. When his team finally arrived in Houston, he witnessed firsthand the overwhelming results of Hurricane Harvey.

“It (the Brown Center) was overloaded,” he said. “We had to move evacuees so we could set up our area.”

And their area was a welcome sight to many of the storm refugees. Kupietz and his team were able to administer any medical attention required, and also help fill prescriptions where needed.

Kupietz says he was impressed with the organization of the evacuation and the shelter. Houstonians, he said, were in good spirits. Barbers and Beauticians were set up, and this hurricane evacuation was the first time he’d seen pets in public shelters.

Emergency Management, as an academic discipline, has become increasingly important in today’s world, says Kupietz. He recalls being on a team responding to Hurricane Floyd after it devastated parts of North Carolina. He says since those days in 1999, North Carolina has come a long way in emergency management planning. And planning, he says, is crucial to the future.

But planning for disasters, rather than responding to them, requires trained professionals. Kupietz says students studying Emergency Management will head out into the professional world upon graduation, prepared to lead in this burgeoning field.

“The traditional way of thinking is that you work for FEMA or a county government,” said Kupietz. “The more modern way of thinking is working for NGOs (non-government organizations), private business and industry, to help them seek ways to mitigate losses.”

When you put professionals in those positions, says Kupietz, you save money. You save money, he added, because you are preparing for, rather than responding to, disasters. 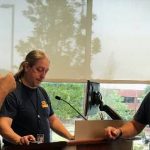