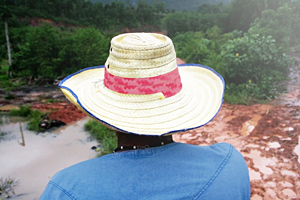 ECSU’s Summer Session is in full swing, with students striding across campus to classes, study sessions or sunny breaks on the promenade.

While basking in the sunshine has its pleasures, Dr. Anthony Emekalam, ECSU clinical assistant professor of pharmacy, cautions that overexposure to the sun can be hazardous, even for African-Americans.

&quotSkin cancer is a very serious problem among African-Americans primarily because many African-Americans erroneously believe they are immune to skin cancer,&quot said Emekalam, a native of Nigeria. &quotOur skin has advantages of pigmentation, but it’s not excluded from the damaging effects of ultraviolet (UV) radiation. We are putting ourselves in harm’s way and not knowing it.&quot

The summer months pose &quotserious risks of skin damage for students because they tend to spend more time outdoors with very little clothing&quot to protect them from the sun, he said.&ampnbsp Students head to the beach for a day or weekend of fun in the sun not knowing that sand and other bright surfaces reflect UV rays and can double UV exposure.

The consequences can be dangerous.

According to the National Council on Skin Cancer Prevention, more than 2 million new cases of skin cancer are diagnosed each year in the United States. The most common form of skin cancer among African-Americans is squamous cell carcinoma, which is easier to cure particularly if detected early. The more dangerous skin cancer, melanoma, is more often diagnosed among Caucasians.

Contributing to the problem is the misconception that &quotblack don’t crack.&quot Melanin, the agent that gives skin its color, confers a significant level of protection from dangerous and cancer-causing UV rays to people with darker complexions and skin tones compared to Caucasians and people with lighter skin color, Emekalam noted. But having an abundance of melanin does not grant immunity from skin cancer to people of color, he said.

The first level of protection is knowledge, Emekalam said.

&quotWe have to be aware that we can burn, even on cloudy days. We may not turn bright lobster red, but that doesn’t mean we don’t burn,&quot he said.

Students, he said, should look for the following signs to determine if they have suffered sunburn or skin damage from overexposure: tingling or burning sensations on the skin, numbness or dullness, excessive dryness, blisters and peeling, or fine bumps like an allergic reaction.

Any prominent or abnormal changes or deviations from what’s normal for the skin, including moles, should be looked at by a doctor, Emekalam said.

Emekalam and Dr. Joseph T. Jenkins, a general surgeon with Carolina Surgical Care in Elizabeth City, N.C., who handles a number of skin cancer cases each year, recommended that students avoid prolonged outdoor exposure and wear sunscreen with a sun protection factor (SPF) of 30 or higher when outside.

&quotIt’s hard to change behavior, but we can educate students on how to protect themselves from the sun,&quot Jenkins said.

Emekalam agrees. Working as a community pharmacist in Washington several years ago, he helped educate young people about healthy outdoor living by contributing to a brochure on how to stay safe in the summer months. He plans to do something similar at ECSU, possibly for the second Summer Session or for Student Orientation in August.