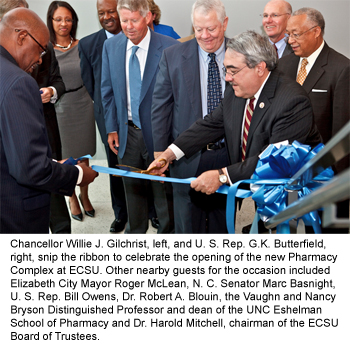 &quotIt was very exciting,&quot Dr. Latasha Weeks, the new director of the UNC-Chapel Hill/ECSU Doctor of Pharmacy Partnership Program, said of the response at the open houses. &quotA lot of students came up to me afterward and asked how they can prepare for admission and use their skill sets in this area.&quot

The new $28 million, glass and steel structure, located near the Jenkins Science Center, has three stories and 52,500 square feet of classroom, laboratory and office space. The university’s Drug Information Center shares the first floor with undergraduate labs, while the second and third floors are dedicated primarily to the doctor of pharmacy program, including classrooms, IV simulation and compounding labs and faculty research labs.

ECSU’s partnership with UNC-Chapel Hill’s Eshelman School of Pharmacy was launched in 2005 to help alleviate the shortage of pharmacists in northeastern North Carolina, one of most medically under-served regions in the state and the nation, Dr. Weeks explained. The program’s goal also is to produce pharmacists who better reflect the area’s diverse African-American and Latino populations.

Through the partnership, students at ECSU are instructed &quotvirtually&quot by professors at the UNC Eshelman School whose lectures are transmitted in real-time through interactive video conferencing to classrooms in the new pharmacy complex on ECSU’s campus, Dr. Weeks explained.

Faculty at ECSU serve as liaisons and teach as needed.

After three years of classroom instruction, students complete a yearlong series of four- to five-week clerkships under the supervision of established and licensed pharmacists. The clerkship rotations are done in a variety of settings, such as hospitals, clinics and agencies, which gives students a broad practical experience in pharmacy.

Graduates of the program earn a doctor of pharmacy degree from the UNC Eshelman School of Pharmacy, with a special designation that it is done in partnership with ECSU, Dr. Weeks said.

While prerequisites for admission to the doctor of pharmacy program include two years of undergraduate work, largely in the sciences and mathematics, most students entering the program have completed their baccalaureate degrees, Dr. Weeks said.

Nearly two dozen undergraduates at ECSU inquiring about the professional program attended the Oct. 6 open houses, along with a like number of high school students and their families. Dr. Weeks talked about career possibilities and the future of the program.

&quotPeople typically think of pharmacists as the man or woman behind the counter at CVS,&quot Dr. Weeks said. &quotThat could be the reason why students aren’t as excited about pharmacy because that’s what they see. That’s all they know.

&quotBut once they come to events like open houses, after they do shadowing or participate in summer programs, they learn more about what pharmacists can do and that stimulates interest in pharmacy as a profession.&quot

She said career options for pharmacists are wide and varied, and can include working for government agencies such as the federal Food and Drug Administration based in Rockville, Md., the Centers for Disease Control and Prevention in Atlanta or on military bases around the world.

There also are jobs within the pharmaceutical industry, doing drug writing, working for professional organizations, consulting on government and regulatory affairs, in the managed care aspects of pharmacy, or working as a health educator or administering immunizations in a public health department.

&quotWe (pharmacists) can do a wide variety of things beyond working in community pharmacies or hospitals, which is certainly the backbone of pharmacy&quot Dr. Weeks said. &quotBut I think once students go through pharmacy school and are exposed to different practice settings, this can affect their choice of career and their ability to stay in the area.&quot