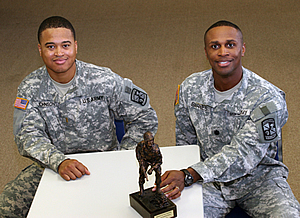 Lt. Col. Troy Barnes proudly strode to the stage of the Floyd L Robinson Auditorium during the 2011 Winter Faculty/Staff Institute and presented to Chancellor Gilchrist and staff and faculty representatives, the 2010 Iron Mike Award.&ampnbsp

The audience of faculty and staff applauded the arrival of the award given to the university for the Military Science Department’s successful completion of their goal to commission six officers in 2010. The U.S. Army set the goal of commissioning six officers four years ago. Six students were commissioned at ECSU during 2010. Four are serving the nation on active duty in the U.S. Army and two are serving as members of U.S. Army Reserves.

ECSU is one of 41 ROTC programs classified in the Fourth Brigade, and was one of five of the institutions in the UNC system to earn the trophy. Across the country, 272 programs&ampnbsp operate Senior Reserve Officer Training Corps programs which are eligible to receive such awards. Barnes works with a staff of seven military and civilian personnel. Barnes speaks at the university’s Open House sessions, New Student Orientation sessions, and the classrooms to promote the Military Science Department to students. Referrals for participants come from the Admissions Office, the Registrar’s Office, staff and faculty, parents of students enrolled at ECSU and people in the community.

Lt. Col.&ampnbsp Barnes said he was proud to see this military science program reach their goal for 2010 and is confident the program will bring the award to ECSU in 2011.