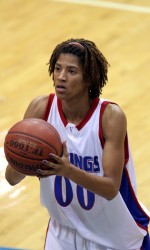 CHARLOTTE, NC- The Elizabeth City State University women’s basketball team got their first win of the 2006-07 season via an 84-79 win over Johnson C. Smith University Tuesday night at Brayboy Gymnasium. In the first half the Lady Vikings opened up a 14 point margin (33-19) after a 3-pointer by Ashley Bowman with 8:00 minutes to go before the break. The Lady Golden Bulls clawed their way back in the game by closing the half on an 18-9 run and the Lady Vikings held a slim 41-37 lead at the intermission. In the second stanza junior All-American Celeste Trahan managed to score 11 of her game high 27 points despite playing limited minutes because of foul trouble. While Trahan sat, JCSU built a 62-55 advantage with a little over nine minutes left in regulation. ECSU then went on a 7-0 run, tying the score at 62 all on a DeAnna Chestnut lay-up with 7:15 to go. The game would have three more ties before the Lady Vikings’ Tanika Hudgins was fouled on a lay-up and subsequently made the free throw to give ECSU a 77-74 lead and they would not look back from there. Tiffany Smith scored 19 while Deanna Price contributed 10 to round out the double figure scorers for ECSU. Trahan added 10 rebounds to go along with her 27 points to register her 42nd career double-double. JCSU (3-2, CIAA 0-1) landed four in double figures with Rochelle Bodie leading the way with 20 points. ECSU (1-2, CIAA 1-0) will return to action on Thursday, November 30th in Salisbury, NC against Livingstone College. Game time is slated for 5:30pm. For more information on ECSU Athletics, visit www.ecsuvikings.com .