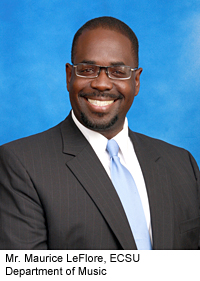 President Barack Obama recently proclaimed June as African-American Music Appreciation Month. During this month, we recognize the people whose musical talents and gifts have provided delight and inspiration throughout the decades.

Obama explained in his proclamation that musicians, composers, singers and songwriters provided a multitude of music for all occasions. In all fairness, we can’t forget those involved in the production of famed recorded and live performances – producers, music engineers, conductors, sound recording technicians and others.

ECSU instructor and musician Maurice LeFlore talked about the impact of musicians whose works crest billboards and crown DJ countdown lists. He teaches a number of courses in which those famous musical artists serve as models – &quotThe African American in Music,&quot &quotCollegians Jazz Ensemble and Instrumental Techniques and Conducting&quot &quotUniversity Marching and Concert Band&quot and &quotApplied Saxophone.&quot However, study of these musicians isn’t limited to specific individuals and musical genres. Rather, it includes the artists’ impact upon American society.

When young students ask LeFlore the point of dedicating an entire month to rap, rhythm and blues and gospel music, LeFlore urges them to broaden their scope.

&quotBlack music is so much more than just three genres (types) of music, or simply what’s on the iPod,&quot he responds. &quotLook beyond what is receiving the most air play on the radio or television.&quot

The lessons taught by LeFlore, assistant director of the ECSU Marching Band, allow students to make interesting comparisons. For example, students may examine why 35-year-old gospel singer-songwriter Tye Tribbett’s message isn’t fundamentally different from that of Shirley Caesar, the 72-year-old multi-Grammy, Dove and Stellar award winner.&ampnbsp Their message — love God, love humanity adhere to the &quotGolden Rule&quot don’t just be good, do good deeds.&ampnbsp Those good deeds should be for the glory of the Lord, and not for personal accolades.

&quotWith Caesar, the message was in some cases shrouded by the pianist/organist, augmented with a trio or quartet of harmonized voices, or even a mass choir.&ampnbsp It was traditional in its original, pure sense, yet not ‘old’ or otherwise negatively described when traditional music is unfairly compared to contemporary or hip-hop gospel music,&quot LeFlore said.

However, the vehicle of delivery — how the music is presented — differs for artists recording more contemporary music. While artists in the past relied on vinyl records to deliver their message, artists today rely on modern jargon, current fashions, and a fusion of rock, rock ‘n’ roll or jazz with gospel for their music videos – a medium that appeals to more than the single sense of hearing.

When the class discussion turns to rap — for example, 1980s rap — LeFlore urges students to make note of the artists’ vocal delivery, their attire, the instruments used, their credibility in the eyes of peers and listeners, and the cultural and political climate at the time in the United States and the world. Students are challenged to determine how tunes from the past differ from today’s music.

As for jazz, LeFlore said Louis Armstrong frequently is cited for his work, both instrumentally and vocally — his phrasing, inflections, ability to make the popular songs and jazz standards of the day as much &quothis own&quot as his original compositions. Armstrong often is considered

&quotthe first jazz soloist.&quot He set a standard that many modern musicians incorporate into their improvisational offerings, LeFlore said.

Jazz vocalist Sarah Vaughan emerged during the bebop era of the early 1940s and worked with the greats of the time, including Dizzy Gillespie. She had perfect pitch — the ability to sing any note within her range in tune — with a melodious voice that actually became richer and deeper as she grew older.

&quotWe often speak of the vehicles through which music is transmitted, but she was comfortable in virtually all of them — duets, trio withvocalist, and big band,&quot LeFlore said of Vaughan.&ampnbsp &quotWe also explore why and how women in jazz, unfortunately, were and are largely overlooked and under-documented, whether in print or visual-audio recording,&quot LeFlore said.

Many students have heard of pianst-composer Scott Joplin and the genre of music for which he is most famous — ragtime. However, they’ve not heard of his opera, &quotTreemonisha,&quot heralding the importance of education for the Negro, a recurring theme during the time of its creation in the early 1900s.

As an instructor, LeFlore teaches that opera isn’t strictly and explicitly a European art form. Students are exposed to some of the components of opera — an overture, choruses, recitatives and arias — within the current African-American experience. &quotTreemonisha&quot is lesser known, thus making it ideal for all types of musical and extra-musical discoveries. It also is a fine companion — and contrast — when studied with the better-known opera &quotPorgy and Bess.&quot

&quotUltimately, it’s important to not only examine the artists and their output, but the circumstances and conditions in which — and often in spite of — they created that art to develop a working comprehensive knowledge of their experience,&quot LeFlore said. &quotThose are many of the reasons African- American Music Appreciation Month is worthy of study.&quot