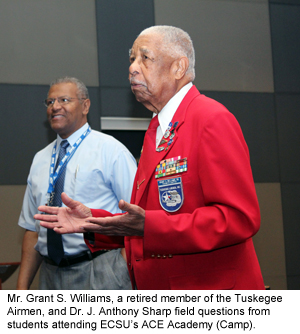 It’s the third summer that ECSU has hosted the ACE Academy (Camp). On Monday, the participants toured the campus by foot. Their perspective changed Thursday, when they boarded Air Viking One for a flight an an overview of the campus and Elizabeth City.

Dr. J. Anthony Sharp, director of the Aviation Science program at ECSU, flies the university’s single engine, Cessna Skyhawk, over campus and the city for the students’ first aerial view of common ground.

&quotIt’s wonderful to see it all from about 1,500 feet. They can see the residence halls, the cafeteria, Dixon-Patterson Hall where they have taken classes over the last week.&ampnbsp They can appreciate seeing all the buildings they walked past while walking on the ground,&quot Sharp said. &quotRelatively few of the students in our ACE Camp have been passengers on commercial flights but even fewer have been passengers on a small plane.&ampnbsp That great view is such a surprise for them.&quot

What doesn’t surprise the students is the cockpit, the communication system or instrument panel. During ACE Camp classes, students learned about the operations of planes, the design features of various planes, flight patterns and the rules and regulations that the Federal Aviation Administration stipulates for pilots. The ACE Camp students are introduced to the university’s air traffic control simulator and its flight simulator. The Aviation Career Education (ACE) Academy Program was designed by the FAA to provide students with an introduction into aviation and aerospace.

This session is the second session for the ACE Camp. The first session was held in mid June with a co-eh group of students with a similar agenda. The classes and 5 field trips provided students with tips on a variety of career options awaiting the next generation.&ampnbsp For the coed class attending the June segment of the ACE Academy Camp, guest speaker and retired Tuskegee Airmen Grant Williams, provided an important chapter of aviation and American history. The camp at ECSU is one of four such camps operating in North Carolina and one of many offered across the nation. Each is unique. Sharp said the camp for females allows them to meet female professionals in aviation and to get acquainted with other females who share their career interest. Betty Shotton,&ampnbsp an entrepreneur, pilot and CEO of LiftOFF Leadership was a guest speaker at the all female ACE Academy Camp.

&quotWhat we have noticed is some males, who enroll in the ACE Camp who have a great deal of knowledge about airplanes and the aviation industry, simply because that is their interest,&quot Sharp said. &quotOthers come with an open mind to learn about aviation. It’s important to increase the number of females working in this industry so this camp is a good way to reach them at the high school level.&quot

&quotSince ours is a residential camp, these students see what it is like to be a college student before they become a college student. They are taking classes in the same classrooms where our aviation science courses are held. They use the simulators, and it all dispels misconceptions they might have about the difficulty of college level courses.&quot

&quotBefore we depart, we (staff) explain what they are likely to experience, the sights and a few bumps they might encounter in the air just as you would riding in a car on bumpy pavement. I take the plane for a flight before we depart with students so I know what they will encounter on that day,&quot Sharp said.&ampnbsp &quotOnce they are airborne they are eager to return to tell their parents, family and friends all they have seen.&quot