0
513 Views
Warning: json_decode() expects parameter 1 to be string, object given in /srv/users/serverpilot/apps/ecsunewsroom/public/wp-content/plugins/posts-social-shares-count/classes/share.count.php on line 66
0
Shares 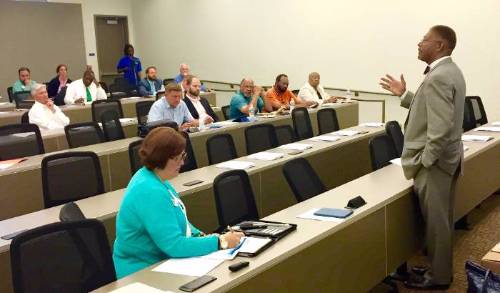 Facilitating the dreams of future entrepreneurs, and working toward a sustainable regional economy, those are some of the goals of a new initiative launched by Elizabeth City State University in cooperation with community partners such as Albemarle Commission.

The initiative is called InnovatEC and it was introduced to the public at a gathering in the Gilchrist Complex on the campus of ECSU June 21. Special assistant to Chancellor Thomas Conway, Russ Haddad, facilitated a meeting that brought members of the northeast North Carolina community together to discuss the future of the proposed program, and an entrepreneur lab.

“This is to do what universities do,” said Conway in an opening statement to a crowd of 50 community leaders. “Get people together and talk about the thought process.”

The idea behind InnovatEC, explained Haddad, is to begin a discussion on how to best serve people in the community, giving them a leg up in an effort to build new businesses and ultimately spur regional economic growth. The method, explained Haddad, is not a top-down approach, telling future entrepreneurs what to do, but rather asking them what they believe is needed in their communities and assisting them in reaching their goals.

One component in assisting future entrepreneurs is working with Duke University graduate student, Jonathan Meyer. Meyer has been conducting a study in the region as a part of his thesis work as he earns his Masters in Public Policy from Duke’s prestigious Sanford School of Public Policy. Making a presentation via Skype to the crowd, Meyer explained that his six months of research in the region will help the initiative address several key points:

1) Why entrepreneurs and innovators important

3) And how to stimulate the regional economy.

Rural North Carolina communities have moved from a manufacturing economy to a service economy. And those communities are looking for new approaches to spur economic growth, explained Meyer. The idea of InnovatEC is to “cultivate a talent pipeline.”

“We come together to connect with business start-ups,” said Meyer.

As InnovatEC moves forward, Haddad says he hopes community leaders will continue to come together to facilitate an environment where all members of the region can participate in mapping their economic future.

“This is about human capacity,” said Haddad. “What do people want to do?”

InnovatEC member Cathy Davidson of the Albemarle Commission said the group plans to have a feasibility study completed by Dec. 16. The next InnovatEC meeting is scheduled for August, the exact date to be announced.

“It really is an exciting time for our region,” said Davidson.