When Crime Scene Investigator Brandon Knowles invites the estimated 30 high school students to the table to learn how finger printing works, they quickly gather for a demonstration. Fifteen-year-old Kenedi Rios takes her place at the table, pulling her hair back, anticipating the next event in a series of weeklong activities at the Junior Police Academy, held on the campus of Elizabeth City State University.

“I wanted to know about the operations behind the police,” Rios said of her decision to join the Junior Police Academy. “A lot of people misjudge them.”

This is the fourth annual academy, the brain child of Elizabeth City Police Chief Eddie Buffaloe. The weeklong event is held in the Ridley Student Center. Kids ranging from 9th grade on up spend the week learning about a variety of law enforcement issues, as well as procedures and policies relating to police operations.

“This gives them exposure to what we do on a day-to-day basis,” says program facilitator, and community policing officer, Trevon Franks. “We expose them to different facets of police work.”

The Junior Police Academy is just one of a number of summer camps held on the ECSU campus. From STEM education and NASA-related camps, to Girls Empowerment camps, middle and high school students from across the Northeast North Carolina region have an opportunity to broaden their experience while being exposed to a college campus, sometimes for the first time in their lives.

Rising 9th grader Christopher Revell says the Junior Police Academy is giving him an opportunity to know firsthand how law enforcement works, how hard they work, and how difficult it is to do police work. It’s that knowledge, he said, that has him thinking about a future in law enforcement.

They watch as Officer Knowles demonstrates the procedure, and then each one of them gives it a try, finding the ink and the printing somewhat awkward, but having fun with the process.

Officer Franks says the students are taken through a number of other activities throughout the week, such as drills, a K-9 demonstration, and even classes on writing police reports.

Christopher Revell says there are so many activities, that it’s difficult to pick one that stands out for him.

“There’s a lot going on and I’m having so much fun, it’s hard to pick one thing,” he said.

The week will end with a ceremony and reception for the academy students on Friday, July 28, at 3 p.m. 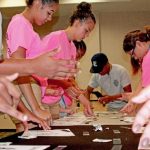