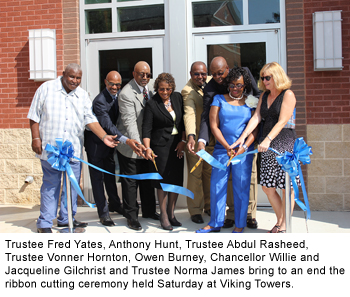 Elizabeth City State University administrators, faculty, staff, students, trustees and guests gathered on Saturday, Sept. 8, 2012, for the ceremonial ribbon cutting marking the opening of Viking Tower. The three-story, 210-bed residence hall houses students in suites that include private bedrooms, some double-occupancy rooms, an exercise room, laundry rooms on every floor and computer labs. Architect Anthony Hunt of Millennium 3 Design Group based in Charlotte, N.C., said he was thrilled to work on the project. &quotStudents are looking for modernization, innovation, computer technology in their residence halls. They want residence halls that offer modern social spaces or common areas and a good selection of amenities. Students want conveniences,&quot Hunt said. &quotI’m proud to say this was a project that involved a black architect, a black university and black contractor — a first mind you — for a $12.6 million project.&quot Viking Tower is located on the northeast quadrant of the ECSU campus behind Bias Hall. It sits in the heart of campus near The Promenade, where many student activities are held, and a short distance from Johnson, Lane and Moore halls, where numerous classes are taught. Owen Burney Jr., owner of Burney and Burney Construction Co. and the contract manager said he was especially proud to deliver to students a new residence hall so closely located to classrooms and to the center of campus. He said Viking Tower is far different from the simple structure he lived in as an ECSU freshman in 1973. That year, he met fellow student Clayton C. Peele Sr., who would remain his friend until Peele’s death in June 2012. Peele served as Viking Tower’s project manager. Burney said the building also brought together a diverse group of laborers to the construction site for jobs that are important to the state’s economy. &quotWe were proud to do this project for the university. In the past, Burney and Burney completed some building renovations and some additions to buildings for ECSU. We really enjoyed building a new residence hall where we knew students could form friendships that last decades,&quot Burney said. &quotWhile we’ve completed residential and commercial projects for many other clients in North Carolina, Burney and Burney is proud to see this project completed on ECSU’s campus.&quot ECSU Chancellor Willie J. Gilchrist said he was pleased to see the project complete in time for the start of the fall semester. The completion of the new residence hall ended the need for the university to house students off campus over the last four years. ECSU now houses 1,542 students in 10 university residence halls.