0
248 Views
Warning: json_decode() expects parameter 1 to be string, object given in /srv/users/serverpilot/apps/ecsunewsroom/public/wp-content/plugins/posts-social-shares-count/classes/share.count.php on line 66
0
Shares 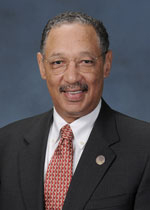 The Honor’s Program at Elizabeth City State University will hold its Convocation at 3:30 p.m. on April 8 in the auditorium of the Mickey L. Burnim Fine Arts Center. Over 50 awards will be distributed to ECSU students who have excelled in the Schools of Arts and Humanities, Education and Psychology, Business and Economics and Mathematics, Science and Technology. Dr. Velma Blackmon is director of the Honor’s Program Convocation. Our guest speaker is Dr. Paul. R. G. Cunningham

Dr Paul R. G. Cunningham, a native of Jamaica, is a medical graduate of the University of West Indies in Jamaica.&ampnbsp He also completed surgery training at Mount Sinai Hospital, Bronx Veteran’s Administration Hospital and City Hospital at Elmhurst, all in New York City.

After training, Dr. Cunningham remained in New York to begin his career as a surgeon. Later he moved to Bertie County – the town of Windsor N.C. in 1981.&ampnbsp He practiced there as vice chief of the medical staff at Bertie Memorial Hospital and taught East Carolina University residents, some of whom rotated through his practice.&ampnbsp He joined the ECU faculty full time in 1984, and became medical director of trauma the following year.&ampnbsp He was also interim director of the organ transplant division from 1990-1991 and chief of the medical staff at Pitt County Memorial Hospital during 1991.

Dr. Cunningham rose to professor of surgery in 1993 and was chief of general surgery at ECU from 1999-2002.&ampnbsp From 2002-2008, he was professor and chair of the Department of Surgery at SUNY Upstate Medical University in Syracuse, New York.&ampnbsp From 1990-1998, he also served as a major in the Army Reserve Medical Corps.

Dr. Cunningham is certified by the American Board of Surgery and is a fellow of the American College of Surgeons.&ampnbsp He is a charter member and past president of the Eastern Association for the Surgery of Trauma and a member of many other medical organizations local, state and national committees and boards, including one that examined the racial disparity in organ distribution and time spent on organ waiting lists among minorities.

He has written or co-written 65 scholarly articles and contributed to other research publications and presentations.&ampnbsp During his career he and colleagues have received more than $1.5 million in research funding, primarily in the areas of trauma prevention and treatment. He and his wife Sydney, have four children all of whom live in North Carolina.