0
957 Views
Warning: json_decode() expects parameter 1 to be string, object given in /srv/users/serverpilot/apps/ecsunewsroom/public/wp-content/plugins/posts-social-shares-count/classes/share.count.php on line 66
0
Shares 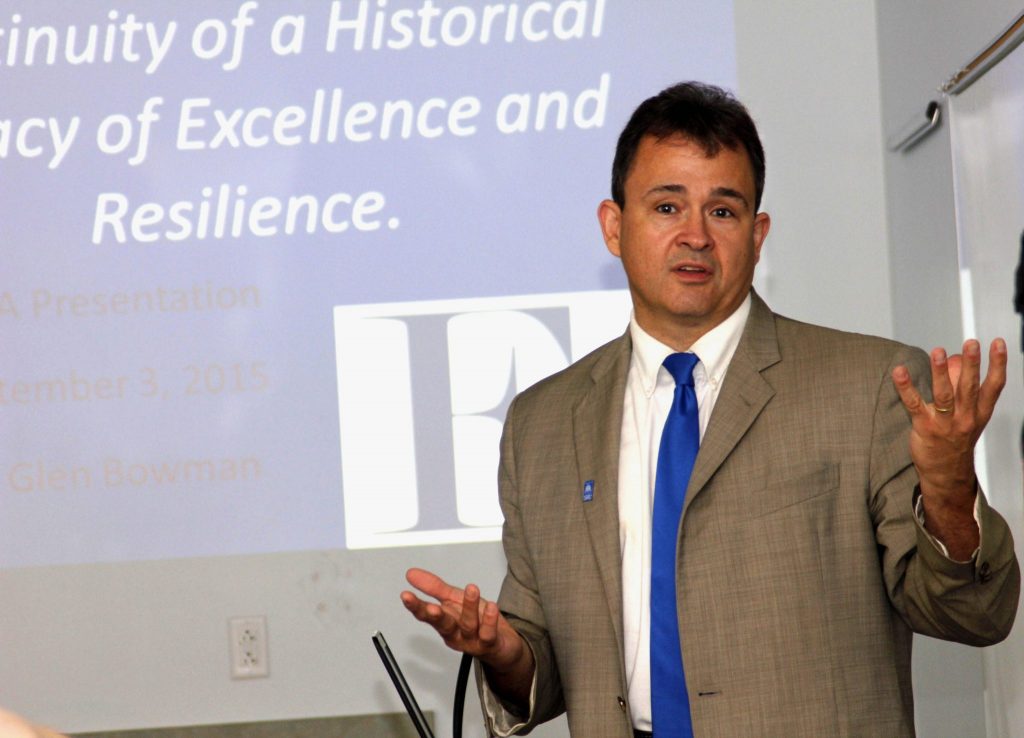 ECSU professor of history, Dr. Glen Bowman, will kick of Chancellor Karrie Dixon’s Installation Week with a lecture on the history of the university. The lecture is Tuesday, Sept. 3, at 3:30 p.m. in the Fine Arts Center. It is free and open to the public.

What has traditionally become a part of the freshman seminar, a lecture on the history of Elizabeth City State University, will be open to the public next week as part of the celebration of Chancellor Karrie Dixon’s installation.

Dr. Glen Bowman’s work on ECSU history has delved deep into what has made this university unique and important to the higher education landscape in North Carolina.

The lecture will be held Tuesday, Sept. 3 at 3:30 p.m. in the Mickey L. Burnim Fine Arts Center. It is a celebration of the university’s 128-year life to date, focusing on what Dr. Bowman calls ECSU’s “resilience.”

“The point (of the lecture) is to focus on who we are and how we have survived,” he said. “How we have gone through so much and how we are here 128 years later.”

Between his book on ECSU history, “The Continuity of a Historical Legacy of Excellence and Resilience,” a subsequent weekly history column that ran for several years in the local newspaper, and his freshman seminar lectures, Dr. Bowman is consistently peeling back the layers of the university’s history.

The founding of ECSU in 1891 – then known as the State Normal School – gave young men and women from the surrounding African American communities the opportunity to excel where they otherwise did not have choices in education, or the workforce. They came to this school to train as teachers and left to impart their knowledge on other youth throughout the region and beyond.

And throughout that history, ECSU has survived many challenges.

Dr. Bowman points to the period during The Great Depression as an example of the institution’s resilience and perseverance in the face of adversity. Under the leadership of college president John Henry Bias, difficult times were overcome using creative thinking.

Dr. Bowman says Bias was a business genius. Not only was he successful in his personal dealings, he found creative solutions for the college as well, finding ways to enroll students despite a lack of funds.

“He realized students were largely from poor farming families,” said Dr. Bowman. “He made a deal with their families.”

The university was in need of food to feed students, so farming families could barter food for education. That coupled with the university’s own farm – located on what is now the southern portion of the campus – fed students and kept the college alive during those difficult times.

Dr. Bowman’s lecture also focuses on the many changes that have taken place at ECSU. For example, the university was not always known as the Vikings; they were once the Pirates.

But there were two Pirates in the CIAA, one here and one at Hampton University, and officials with the athletic conference were looking for a name change. Under the guidance of college president, Walter N. Ridley, a decision had to be made about the future name of the college’s athletic program.

Dr. Bowman says there were two schools of thought on the matter. Dr. Ridley had championed the Viking name, while now retired coach and athletic director, Bobby Vaughan, was in favor of the Buccaneers.

The decision, however, was ultimately left to the students and in the end, the Mighty Vikings was born.

Dr. Bowman will also discuss ECSU’s aviation program, and how it became the university’s signature program. It’s legacy, he explained, goes back to Chancellor Marion Thorpe’s desire to set ECSU apart by establishing unique programs not found elsewhere in the state.

These are just a few of the stories Dr. Bowman shares during his lecture. What is most important, however, is the message these stories convey: “I try to let them (freshmen) know that they are part of something unique.”

The lecture is free and open to the public. 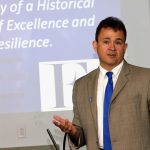