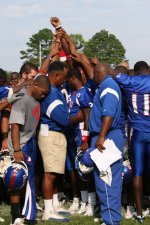 The Viking last played in the post season in 1981 in a first round loss to Northern Michigan University. The Vikings, who dropped a heartbreaking loss to North Carolina Central in the CIAA Championship game Saturday afternoon in Durham, will get the chance to extend their 2006 season, which marks the best in school history with a record of 9-2. On Saturday, November 18th, ECSU will host the first round of Division II Playoffs versus the number five seeded Delta State University Statesmen (9-2) at 1:00pm at Roebuck Stadium. The winner of Saturday’s game will face North Carolina Central who received a bye as the top seed in the region. The complete listing of the 2006 Division II Championship Bracket can be found at the following link: Championship Bracket For more information on ECSU Athletics visit www.ecsuvikings.com.