0
364 Views
Warning: json_decode() expects parameter 1 to be string, object given in /srv/users/serverpilot/apps/ecsunewsroom/public/wp-content/plugins/posts-social-shares-count/classes/share.count.php on line 66
0
Shares 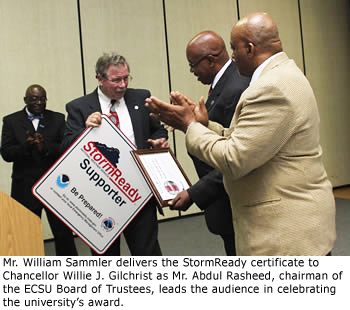 Rickey M. Freeman, an environmental health and safety professional at Elizabeth City State University, and William Sammler, a meteorologist with the National Weather Service’s forecast office in Wakefield, Va., recently presented to the ECSU Board of Trustees a framed certificate announcing the university’s participation in the National Weather Service’s StormReady program. StormReady, a program started in 1999 in Tulsa, Okla., helps arm America’s communities with the communication and safety skills needed to save lives and property before and during a major weather event. It also helps community leaders and emergency managers strengthen local safety programs. The certificate recognizes ECSU as a StormReady Supporter, one of 243 entities across the nation that promote the principles and guidelines of the StormReady program into their severe weather/tsunami safety and awareness plans. Entities may be eligible based on the bylaws of the local NWS StormReady Advisory Board and the endorsement from local emergency management officials. Final approval for StormReady Supporter designation is made by local StormReady Advisory Boards. Successful applicants receive a StormReady Supporter Certificate dated and signed by the meteorologist in charge of the local NWS office. ECSU, like other StormReady Supporters, is listed on the NWS National StormReady website at www.stormready.noaa.gov/supporters.htm The ECSU Office of Emergency Management began the process to become recognized as a StormReady Supporter in November 2011. It consisted of a visit to the NWS Wakefield office participating in two weather awareness training sessions, one which was conducted by Sammler, the Wakefield office’s warning coordination meteorologist a review of the university’s Emergency Operations Plan by the NWS the addition of tornado and lightning annexes to the current plan and providing a minimum of two early warning systems in a 24-hour warning point (a point of contact where the organization can receive notices of possible emergencies 24 hours a day) and providing weather alert radios in the campus Communications Center and Football Stadium. Freeman said by achieving this recognition, ECSU continually is striving to provide the most effective methods to promote life-safety and a safe environment for students and staff. The StormReady program is designed to help local entities prepare for the wide spectrum of storms that plague the country each year — an average of 10,000 thunderstorms, 5,000 floods, 1,000 tornadoes and an average of two deadly hurricanes that make landfall. The nation’s winter storms, intense summer heat, high winds, wild fires and other deadly weather events also lead community organizations to participate in the StormReady program.