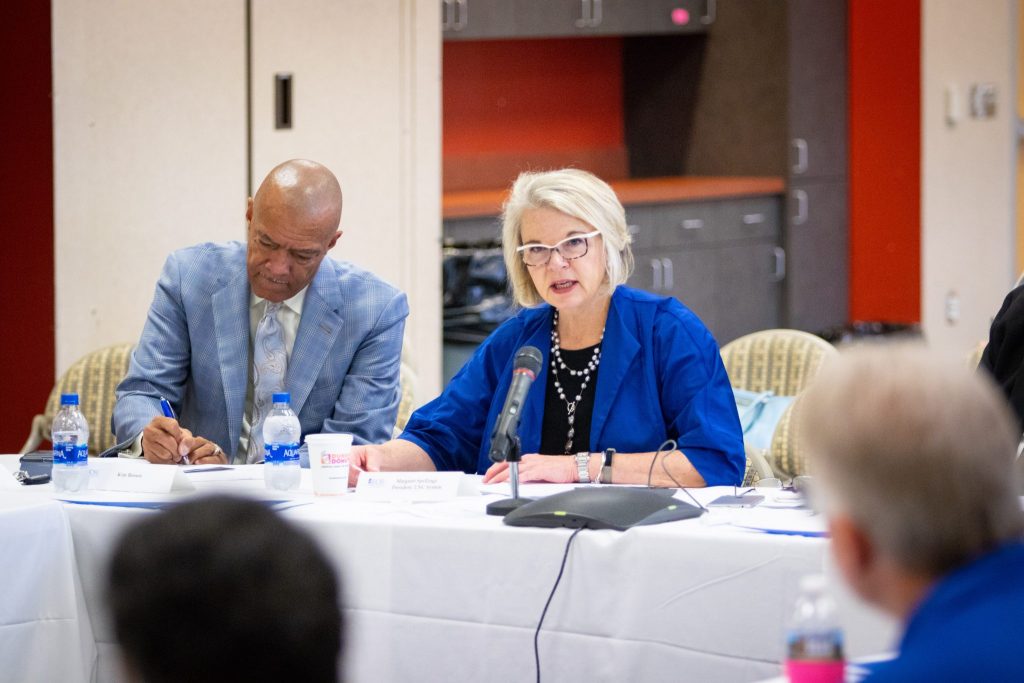 The search is on.

The newly formed Elizabeth City State University chancellor search committee met for the first time Thursday, Aug. 2, launching what will be a five-month process to recruit the institution’s next chief officer.

UNC System President Margaret Spellings attended the first meeting to formally charge the committee with, “One of the most important things we do,” to get the right leader for ECSU.

Barnes, in his opening remarks, recounted the importance of ECSU in his life. Even as a young boy, direct experience with the institution showed him, he said, the significant and transforming power the university had in his life.

Spellings emphasized the importance of ECSU’s history and mission. For more than 125 years, she said, the institution has worked to transform the lives of its students and its community.

With the NC Promise Tuition Program in full swing, enrollment is growing and the state is investing in the future of the university.

“People do not invest in things they don’t have confidence in,” she said.

With these things in mind, Spellings said the person this committee is searching for should have “unwavering integrity,” who knows how to do the “right thing, not the expedient thing.”

“He or she must be guided by a deep commitment and values the importance of a public institution,” she said. “And must be a team player.”

Spellings emphasized that the committee should look beyond the traditional candidate and consider those people who might not have academic backgrounds, but are qualified to lead a university. The person the committee is looking for, she said, should possess the “life experience the role demands,” and “must have skills to relate to a wide range of people.”

She urged the committee to respect the confidentiality of the process and the candidates where appropriate, but also to work with the wider 21-county community, bringing the public to public forums and engage them in the process.

Committee members were given an overview of the process by UNC System Senior Vice President for Leadership and Talent, Lynn Duffy. Duffy explained the process, discussed open and closed meeting laws, and outlined a timeline for the search process.

The search officially began Thursday, Aug. 2, and, according to the timeline, will conclude in February 2019 with the appointment of a new ECSU chancellor.

Between now and February, the committee will work with the national search firm, Isaacson and Miller, to recruit the best candidates in the country to apply for the position. The firm was represented by Bud Mosely who most recently worked with Virginia State University in that institution’s presidential search, as well as Morehouse College and the Tuskegee University.

A chancellor’s search webpage on the Elizabeth City State University website is being planned and will be posted in the near future.