0
266 Views
Warning: json_decode() expects parameter 1 to be string, object given in /srv/users/serverpilot/apps/ecsunewsroom/public/wp-content/plugins/posts-social-shares-count/classes/share.count.php on line 66
0
Shares 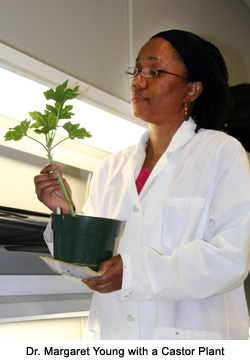 Dr. Margaret Young moves patiently from one plant to another in a quiet biology laboratory in the Jenkins Science Center. She lifts two of them, inspects them and nods with confidence that castor plants hold great promise to our future.

&quotEach year the pressure intensifies for alternative energy. For scientists this is a step by step process,&quot Young said. &quotThere are scientists working on different segments of this research who publish their findings and gather at conferences to discuss their research. There are also farmers who are growing the plants under specific condition to yield the plants that are so critical to our research. You’d be surprised to learn how many people are involved in this process.&quot

Young became involved when fellow researchers at her alma mater Mississippi State University asked if she would be interested in joining a consortium of scientists searching for alternative fuels. Of interest to Young are castor plants. Castor produces an oil that can be more easily converted to biofuels.&ampnbsp In addition, the oil is used extensively in industrial and cosmetic applications. Castor plants can be grown throughout the tropics and now in various locations. Of particular interest to researchers are plants, like castor, that are not grown for human consumption such as corn is.

&quotOver the last 40 years, scientists have seen some encouraging developments in this research. The growth of plants, the impact of fertilizers and spacing between rows of plants, the collection of seeds, separation of oil from the other components of the plant,&quot Young said. &quotToday’s undergraduate is becoming involved in research that will supply and expanding world population that continues to demand energy. We just hope they will be able to supply alternative sources for those demands.&quot