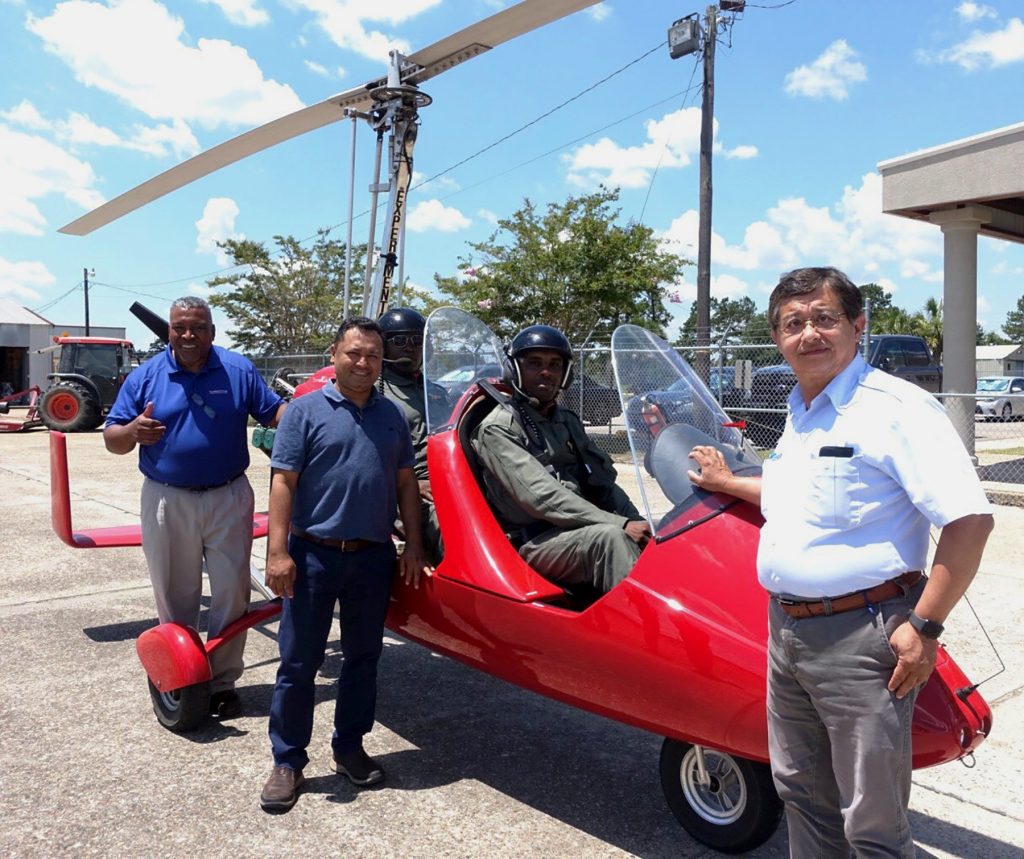 ECSU aviation faculty, left to right, Orestes Gooden, Dr. Kuldeep Rawat, and James Young were on hand for the training of Kenyan Wildlife Services pilots earlier this month. The pilots are part of an anti-poaching effort involving ECSU’s aviation department since 2015.

Kenyan Wildlife Service gyrocopter pilots are trained and ready to fight poachers in a bid to protect endangered African wildlife. And they have Elizabeth City State University to thank for that fact.

ECSU aviation faculty recently worked with Autogryo of Louisiana, in Hammond, Louisiana, to train two groups of Kenyan pilots as part of an ongoing project.

The project to help get the Kenyan Wildlife Service rangers airborne began back in 2015 with a $1 million grant from the National Institute of Justice. Back then, ECSU faculty worked with Kenyan officials to assess their needs and they determined that the best fit for them to patrol game reserves from the air would be the gyrocopter.

The gyrocopters provide that low cost option, and the flexibility to move around nimbly, offering an observer the chance to spot poachers and report to rangers on the ground.

The gyrocopter is a bit bigger than the largest motorcycle, but smaller than the smallest sports car. It seats two people – in this case a pilot in the front and an observer in the rear.

If you ask Young to describe the gyrocopter, he can tell you what it’s like to fly it, and explain the mechanics of the small rotary aircraft. Young, a former airline pilot, has more than 14,000 hours in the air with all sorts of aircraft, including the small machine that will help Kenyan wildlife rangers fight poachers.

“They can turn on a dime,” said Young. “We can control the drop-out of the sky then we can come into a very small area.”

All of which is important to the Kenyans. With the poaching of endangered elephants, giraffes or rhinos, the ability to spot and zero in on the outlaw hunters quickly is key to the operation.

But first, the rangers had to be trained as pilots. Young explained that the FAA designated examiner for gyrocopters is in Louisiana. That’s where Young was certified to fly the small craft.

ECSU’s own two-seater rotary aircraft lives inside a hangar at the Elizabeth City Regional Airport. It is a sleek, white machine. With its open cockpit, it looks like it will zip through the air effortlessly, giving anyone riding in it a thrill.

“It’s like riding a Harley-Davidson (motorcycle),” said Young, smiling at the thought of it.

Inside the hangar, Young pulls out a new helmet designed for the gyrocopter. The shiny black helmet is equipped with noise cancelling headphones, as well as a two-way communication headset.

Young says that although the rotary blades lifting the aircraft are not far above your head, the design of the helmet and subsequent audio gear allows you a ride that’s easy on the ears.

He says five gyrocopters and helmets are on their way to Kenya now. The pilots will be able to patrol the sensitive game reserves from the air, and fly high enough to avoid the possibility of gunfire from poachers.

But Young says ECSU’s participation in the project is not over. There is more being done on campus to help further the Kenyan cause.

Young says professors at ECSU are currently designing and building sensor prototypes using infrared and thermal imaging technology. Those prototypes will be tested here and once they are approved, will be constructed for the Kenyan aircraft to aid in the fight against poaching.

ECSU’s gyrocopter is one of 12 aircraft in ECSU’s fleet so far. Young refers to the number as “11 and a half,” the half being a reference to the gyrocopter’s size. 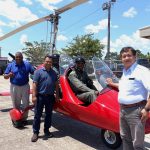