ECSU alumnus is sound engineer for The Lost Colony 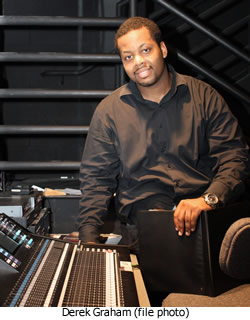 It’s 7:15 in the evening and latecomers are scrambling to the remaining seats eager to witness an unforgettable, live performance on Roanoke Island. Since 1937, tourists and locals have gathered here to view Paul Green’s Symphonic outdoor drama, The Lost Colony. The drama, which is the nation’s longest running outdoor symphony, explores the lives of 117 English women, men and children who arrived on commission from Queen Elizabeth I to establish a settlement in the New World. Three years after their 1587 arrival, English ships returned with supplies, but no one was in sight to receive them. This year, Elizabeth City State University alumnus Derek Graham, ’13, is a part of the production. As the sound engineer, his role is to assure that the audience hears the music and the cast’s spoken words. Graham, now in his second year of a master’s degree theater program at Ohio University, describes the drama as an intense and exciting production. &quotThere are a lot of moving parts in a live production. When you have a production that involves so many people in the cast, you need everybody-the cast, those working with costumes, lighting, everybody,&quot Graham said. He also explained it’s his job to make sure, &quot….the audience goes home with something special to talk about.&quot Graham explained how his duties as a sound engineer affect the show. &quotI developed a rhythm to bring actors in and out just in time for their roles. You develop a sense of timing to know what the actor is doing on stage . . .I have to remember it is time for a particular sound to come in or time for music to come in.&quot For the last two years, Graham has been involved in productions at Ohio University, some in Michigan, and a series of plays at the Oregon Shakespeare Festival in Ashland, Oregon. He credits ECSU with his initial understanding of music composition, sound, and live theater performances. &quotLive theatre is not just for entertainment, it is for healing, inspiration even education. You can experience North Carolina history and American history here,&quot Graham said. &quotThere are 74 performances. I am mentally drained after the shows because I have to remain sensitive to everything going on, but it is rewarding.&quot

ECSU alumnus is sound engineer for The Lost Colony