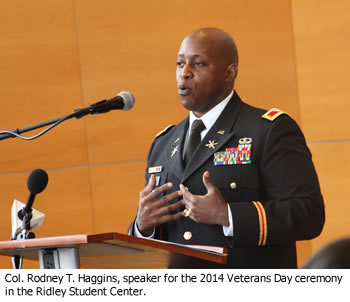 When Col. Rodney T. Haggins greeted a crowd of nearly 100 people attending ECSU’s 2014 Veterans Day ceremony, he thanked them for recognizing a special segment of the population – veterans.

Haggins told the audience Veterans Day is a good time to remember who we are as Americans and the reasons we remain a sovereign nation. He recounted wars some people in the audience witnessed and some wars ECSU students are still studying-the World Wars, the Vietnam War and Operation Desert Storm. As an Army officer with two tours of combat duty to his credit, Haggins assured the audience that veterans and their families made countless sacrifices to assure the nation’s freedom.

&quotThe more recent conflicts in Iraq and Afghanistan are reminders that wars do not end wars. We can never fully repay those 650,000 Americans who died in battle but we can recognize and thank the 25 million still living.&quot

Haggins, a 1987 graduate of ECSU, said returning to campus triggered memories of people who encouraged and prepared him for leadership -former teachers, fraternity members, and family members. Haggins leaned toward nearby ROTC cadets and said he was much like them just 27 years ago. Lessons learned and challenges faced in the military contributed to his development but one factor couldn’t be overlooked.

&quotI stand before you an Army Force Management Colonel not because of what I accomplished but where I came from-ECSU.&quot