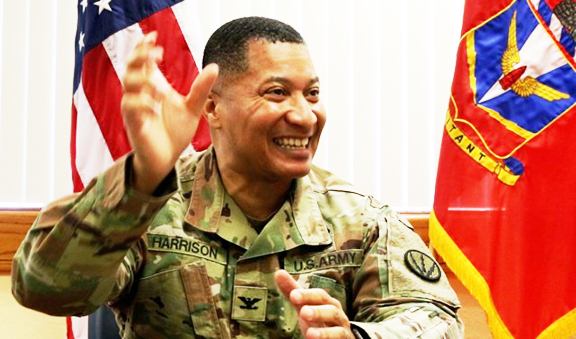 EDITOR’S NOTE: A version of this article first appeared in the U.S. Army’s Fort Sill Tribune by James Brabenec. It is published here with their permission.

Elizabeth City State University graduate, U.S. Army Col. Richard Harrison, just made history, becoming the first African American commandant of the Air Defense Artillery (ADA) School. He is the 44thofficer in Army history to be named to the post.

Col. Harrison is a 1994 ECSU graduate. He recently received the Chancellor’s Legacy Award for his service to his alma mater.

“Not to take away anything from people of other races because I want our young soldiers to know that everyone has an opportunity on a level playing field if they apply themselves,” he said.

Col. Harrison grew up in Sunbury, North Carolina. His mother worked in a sewing factory and his father drove trucks that took him away from home, except on weekends. It was there that their example taught him how to serve others.

His mother drove older relatives to appointments or the grocery store as there wasn’t one in their town. Though his father was on the road a lot, on weekends he worked around the house and helped neighbors.

He said weekends offered time to go out and have fun, but with one weekly requirement.

“We grew up in church, going quite a bit,” Col. Harrison said. “Really it was a sense of service. I was an usher and sang in the choir. I watched my family and my community take care of each other.”

Leaving behind his teenage years, he matured into adulthood even as the desire to continue to serve others made military service a good choice for a career.

Although he saw other service members who came home and went to church in their uniforms, Col. Harrison said they were enlisted members of the military.

“I wanted to show the younger generation that being from a small town didn’t prevent you from becoming an officer in the military,” he said.

As Col. Harrison headed off to college, he did so as an ROTC cadet at ECSU, where he also met his future wife.

“We both had goals and wanted to make something of ourselves,” he said.

During his acceptance speech as the new ADA school commandant, Col. Harrison said pride, hustle, and desire (PHD) helped him to excel and to overcome career obstacles. Sometimes evaluations or duty positions didn’t line up with his expectations, becoming the best Army officer possible.

One such obstacle occurred when then 1st Lt. Harrison served as a battery executive officer.

“Not getting what I felt I deserved was tough for me,” he said. “I took pride in everything I did in that job. I hustled, went after challenges, and wanted to make my job and battery the best in the battalion. I came in early and stayed late.”

Although he would experience more challenges, Col. Harrison would eventually be selected for the Joint Chiefs of Staff, Office of the Secretary of Defense and Army Staff Internship Program.

As a captain, he would also attend Georgetown University to complete a master’s degree.

Col. Harrison would be put in command of a battery of over 120 people and worked for former Secretary of Defense Donald Rumsfeld. That was 2003 when the U.S. was heavily involved in Operation Iraqi Freedom. 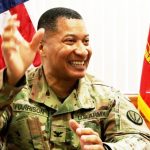