0
498 Views
Warning: json_decode() expects parameter 1 to be string, object given in /srv/users/serverpilot/apps/ecsunewsroom/public/wp-content/plugins/posts-social-shares-count/classes/share.count.php on line 66
0
Shares 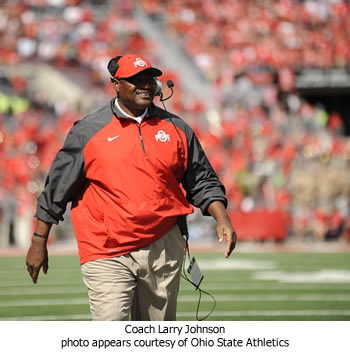 Thirty-eight years have passed but Coach Larry Johnson still enjoys the view from the sideline. His vantage point allows him to see some of college football’s best athletes tossing catching rushing defending and kicking with the vigor of a team that refuses to lose. Last January The Ohio State Buckeyes claimed the first College Football Playoff national championship game. As an assistant head coach of the team’s defensive line Johnson had a sharp view of the victory that fans and sportscasters will long relish. Despite the jubilance that a national title brings Johnson notes January 15 2015 as one of many remarkable days in his life. Victory in life he declares isn’t defined by the final score of one football game. Victory in life results from a series of special achievements-academic success a student making the right decision when fans aren’t present to applaud lessons learned from earlier defeats and victories skills developed over time people using their skills to reach common goals students graduating and becoming productive citizens. As a coach for nearly four decades those are the feats Johnson recalls. It’s not uncommon now for former athletes to post Johnson’s name on the invitation list when they hold ceremonies after graduation. &quotI try to attend many of the events that I am invited to. Sometimes I receive invitations to weddings or other ceremonies that involve my former athletes&quot Johnson said. &quotI got into coaching because I love people young people and seeing the impact we [coaches] have on the lives of young men.&quot &quotMy legacy is investing in young people. I am a great investor so I try to make sure there is a positive outcome in the lives of the young men I coach.&quot Johnson a native of Williamston N.C. said he has been blessed to have witnessed the overall development of student athletes. He credits his success to the examples set by coaches he met early in life-his high school coach Herman Boone and his college coach former ECSU Head Football Coach Thomas Caldwell. He graduated from ECSU in 1973. From Boone and Caldwell he learned that football allows young men to excel as athletes. Competitive sports opens doors for a lifetime of achievements. &quotThere’s a lot of pride out there in college sports. Each year we see outstanding athletes proudly playing for the universities of their choice. When they arrive they’ve earned a four-year scholarship that will help them plan for life after football&quot Johnson said. &quotI tell them their playing time is short but ‘you can move on with your life from here.’ &quot While Johnson admits the schedule of college coaches is booked throughout the year —-practices video clip sessions recruitment trips and public speaking engagements— he cherishes his lifestyle. He dedicated 20 years to coaching high school athletes in Maryland and Virginia. Thereafter he spent 18 years as a defensive end coach for Penn State University. Johnson has built a life around student success. He is a Christian coach who draws wisdom from the Bible. For young prospective coaches he advises them to &quotprepare well for the rigors of the game the rigors of long coaching seasons and never forget the students’ potential is not limited to their athletic skills. &quotYou have to have a brand. Wins and losses are a part of this life but your brand gets you the next job. I knew I would be marketable. I had what colleges wanted&quot Johnson said. &quotYoung coaches should become specialized perfect their skillset.&quot For youngsters dreaming of playing college sports he advises them to seize the moment. Begin planning for academic success and athletic success in middle school. Form the healthy habits of successful athletes and build on those habits throughout high school. Prepare to face keen competition for a spot on the next team. Those are the precursors to claiming a team jersey as a college freshman. &quotAcademic success is a great tool to get where you want to go. Set goals now. The problem with some kids is they don’t take the ninth grade seriously&quot Johnson said. &quotGet a great education. Know where you will be five years from now.&quot 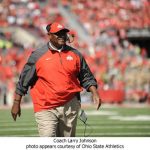