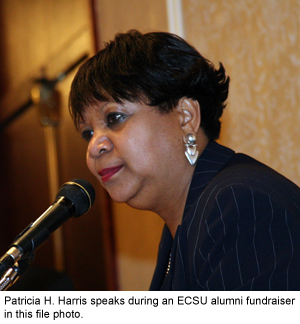 Patricia H. Harris’ heart is as big as her personality.

The active 58-year-old mother of two generously shares her talents as an instructional specialist in the Montgomery County (Md.) Public Schools. She also enthusiastically gives her time to Elizabeth City State University her alma mater where the former board chair of the ECSU National Alumni Association is coordinating a $1 million fundraising campaign for Classes of the 1970s.

Perhaps the greatest gift Harris has ever given is the gift of life.

In November Harris donated her kidney for transplant to a total stranger allowing her ailing 22-year son Jonathan to receive a kidney from another donor.

With her selfless act Harris and her son became part of a 32-person transplant exchange – the largest ever in the United States – in which 16 kidney donors gave a chance at life to 16 people who wouldn’t have lived without a new kidney.

Meeting for the first time just weeks after their surgery and just days before Thanksgiving the entire group was featured on national television. Harris and her son were pictured and quoted in newspapers around the globe.

&quotIt was just an incredible experience&quot said Harris of her journey that began as a simple search to help her son. &quotThere is nothing in the world I wouldn’t do for him. And in searching for a way to help him I ended up helping someone else as well.

A native of Ahoskie N.C. Harris graduated from ECSU in 1974 with a degree in intermediate education. She was living happily in Silver Spring Md. working in the school system and raising her two boys when Jonathan went into renal failure at age 12. It was then that she learned he was born with only one kidney.

&quotOnce your child is born and you see they have all their fingers and toes you think the future is wide open. But you check only the outer things. And when we learned that Jonathan had only one kidney and it had stopped functioning I was devastated. I got on my knees and asked God to take the reins. And I never turned back&quot Harris said.

Jonathan was hooked up to dialysis at night and unhooked during the day to attend school.&ampnbsp When talk turned to transplant the entire family volunteered to be tested to see who may be a match. The only possible donor turned out to be Lloyd Harris’ older son. When Lloyd turned 18 he donated one of his kidneys to Jonathan who was then 14.

The new kidney took Jonathan from 8th grade nearly through high school. His body began rejecting the kidney during his senior year.

&quotWe almost lost him to infection&quot Harris recalled. &quotI prayed and cried all the way to the hospital. God kept me strong.&quot

With a strong antibiotic and now back on dialysis Jonathan stayed in the hospital from Thanksgiving to December and again from March to June. He was able to leave for his graduation ceremony in 2006.

With more than 87000 people in the United States waiting for a kidney transplant Harris never gave up on efforts to help her son. She learned about a transplant exchange in which a family member could donate an organ to someone waiting on the transplant list and in exchange their loved one would be moved up on the national transplant list.

After a year of screenings further tests and complications Harris and Jonathan finally were cleared in October 2010 for donation and transplant. They became part of the 32-person transplant exchange under the direction of Dr. Keith Melancon at Georgetown University Hospital.

While she rejoiced at the possibility of a life-saving operation for Jonathan Harris said she also was concerned about Lloyd who would be anxiously awaiting word on two family members going under the knife.

&quotI knew that this was it&quot Harris said. &quotThere was no fear no reservation no hesitation&quot she said. &quotI had given this all to God 10 years ago and there was no taking it back.&quot

As with transplants across the country the identity of organ donors and their recipients are held anonymous and initially the history-making exchange was no different Harris said. Save family members there was no contact between donors and those about to benefit with the life-saving transplants.

The surgeries were conducted during two weeks in early November at three Washington-area hospitals. Harris underwent surgery on Nov. 11. It lasted four to five hours. Jonathan’s surgery two days earlier lasted six to seven she recalled. After some initial complications Jonathan was released from the hospital on Nov. 21. On Nov. 23 mother and son met the 30 others who shared this circle of life. They hugged laughed cried and sat for an interview and group photo that were broadcast and viewed around the world.

&quotWhen I met my recipient we just embraced&quot Harris said of Kiran Kochhar a 69-year-old engineer of Indian descent who received her kidney. &quotHe was so grateful. His wife said ‘Thank you for giving my husband life.’&quot

&quotWhen we met it was just powerful&quot Harris said. &quotEveryone was so grateful. I just felt very blessed&quot she said.

She and Jonathan are doing well. Jonathan is resuming his studies in broadcasting and communications at Montgomery College. She is back at work and also busy ironing out the details of the finale of the 70s Decade five-year million-dollar campaign scheduled for Homecoming 2011 at ECSU.

Even today Harris said she still receives hugs and calls and notes from people wishing her and Jonathan well. Many of them are fellow ECSU alumni.

&quotThere’s nothing like a Viking family&quot Harris said. &quotThey showered me with prayers and support. When it’s all said and done we are one people&quot she said. 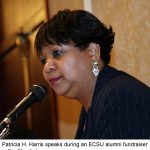