0
599 Views
Warning: json_decode() expects parameter 1 to be string, object given in /srv/users/serverpilot/apps/ecsunewsroom/public/wp-content/plugins/posts-social-shares-count/classes/share.count.php on line 66
0
Shares 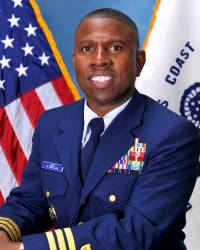 Warren Judge is Viking Pride in action. A commander in the United States Coast Guard, Judge was named executive officer of Coast Guard Base Elizabeth City this past year. His career is the stuff of Viking legend.

A native of Tampa, Florida, Judge joined the Coast Guard after a short stint as a student at the University of Florida. His brother had joined the service and Judge, who was spending more time attending to his social life rather than his studies, figured signing up was a good idea. It turns out he was right on the money.

As an enlisted member of the Coast Guard, Judge was based in Elizabeth City. It was here that he enrolled at ECSU. With a degree in computer science and a minor in aeronautics, Judge would next attend Officers Candidate School.

“ECSU gave me a lot of good opportunity for leadership,” said Judge.

When Judge became an officer in the Coast Guard he earned his Master’s Degree in computer science from Howard University. He would go onto serve in New Orleans during Hurricane Katrina which led to a stint building the command and control infrastructure to manage rescue missions. Judge would go on to work in the nation’s capital and the commander for career management for all Coast Guard officers.

Now Judge is back in Elizabeth City. He’s here serving as the number two officer on one of the largest Coast Bases in the country. He’s been serving on base since May 3 and since that time he’s also been doing what he can to serve his Alma Mater. And you can imagine, whatever Judge does next, his fellow alums can be Viking Proud.