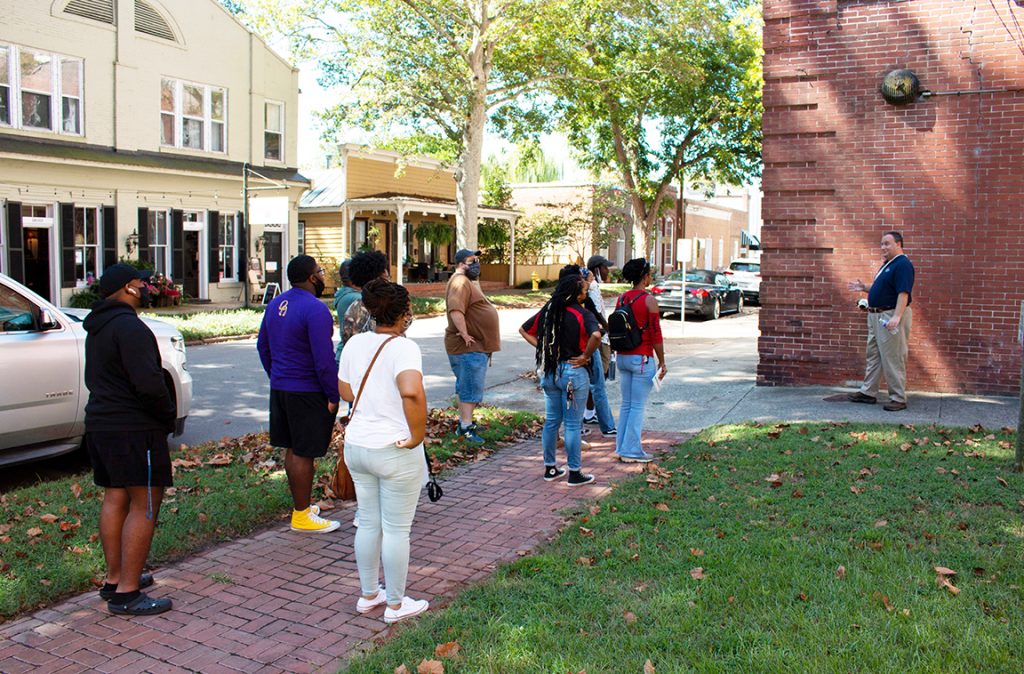 ECSU’s African American Literature class tours Edenton, North Carolina, learning firsthand about the life of the former enslaved woman, Harriet Jacobs. The tour allowed students to put into context her slave narrative, “Incidents in the Life of a Slave Girl.”

It’s one thing to read about history, and it is another thing entirely to walk in the footsteps of those that have going before us. Bringing history alive is what Judah-Micha Lamar’s Elizabeth City State Univesity African-American Literature class did when they journeyed to nearby Edenton to retrace the steps of Harriet Jacobs, author of the autobiography, “Incidents in the Life of a Slave Girl.”

Jacobs was born into slavery in Edenton in 1813. She had been sexually assaulted by her enslaver, Dr. James Norcom, and threatened with her children being sold away from her family when she made the decision to run and hide. That decision famously led Jacobs on a journey that would become the subject of her book and eventually become one of the most recognized slave narratives today.

According to Mr. Lamar, Jacobs’ narrative was published around the same period when freed slave and abolitionist Fredrick Douglass’s books were popular. However, because she was a woman, and she chose to use vivid description of her enslaver’s sexual assaults, Jacobs’ book would not receive the same attention then, as it does today.

“Her story is one of the most widely anthologized slave narratives,” said Mr. Lamar.

In the modern canon of slave narratives, Mr. Lamar says Jacobs’ story is “right up there with Fredrick Douglass.” That fact is thanks to the work, he said, of “Black women scholars recovering the narrative.”

When Dr. Norcom threatened to sell Jacobs’ children if she did not submit to him, she hid in a small space under the roof of her grandmother’s house. Jacobs would hide for seven years before escaping to the North where she would be reunited with her family and work with abolitionists.

While reading Jacobs’ story in the classroom had made some impact on students, history major and senior Veronica Downing says walking in her footsteps was “enlightening.” To be able to experience Jacobs’ life through her eyes, even though many of the buildings no longer exist, was impactful for Ms. Downing.

“It’s important to me, because African American women have to fight to be believed about sexual assault,” said Ms. Downing, who says to this day, despite so many advances in the culture and society as a whole, “Black women are demonized by the standards placed on them.”

It is also important, as an African America, she said, to be able to “touch history,” and make it more tangible. Experiencing the history firsthand lends perspective to the past and helps establish a foundation for the future.

“Life is about retrospect,” said Ms. Downing. “Even with what we learn, we are not always prepared for what is coming. Be the best you can be in the moment. It is important to learn how people dealt with things.”

Nyla Thompson, a junior and English major, says learning about Jacobs, and witnessing the ground upon which she walked, inspired her to understand that anything is possible. As a North Carolina native, she said she was able to connect with the story and understand that she, too, “can really do anything.”

“When you’re reading, you imagine things differently,” said Ms. Thompson. “Putting things into physical context humanized Harriet Jacobs and made her more real to me.”

And that is exactly what Mr. Lamar had wanted for his class. He wanted the history to become real for them and to “watch their eyes light up at certain sites,” and make a “real life connection.”

Edenton is 30 miles west of Elizabeth City on U.S. 17. The historic town offers numerous tours, including a walk through the life of Harriet Jacobs. 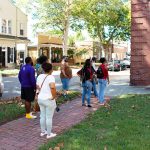