The anticipated event is a black-tie affair celebrating ECSU’s 127th year since its founding, and an opportunity to raise money for the ECSU Foundation General Scholarship Fund. A gala reception will begin at 5:30 p.m. with the main event starting at 7 p.m.

Tickets are $125 per person and can be purchased by going online to www.ecsu.edu/gala .

It’s also an opportunity to celebrate outstanding contribution to the university by individuals. This year nine people have been named recipients of the Chancellor’s Legacy Award:

John Shelton Best: Best is a 1970 ECSU graduate, who went on to receive his Master of Arts from Bowie State University. He is a retired probation official from the District of Columbia Superior Court who conceived the idea of launching a sightseeing tour of African-American attractions. In 1979 he founded Capitol Entertainment Services, Inc., which became the largest bus company in the District of Columbia operating a fleet of luxury coach buses, mini-buses, and sightseeing tour buses.

Bettie Parker: Parker is a 1971 ECSU graduate who would go on to dedicated her life as a mathematics teacher for Elizabeth City’s Northeastern High School. She was recently elected and sworn in as Elizabeth City’s first woman mayor, after serving as the Pasquotank County Board of Commissioner’s first elected African-American commissioner.

Andy Hartsfield: Hartsfield recently completed his second full term as a member of the Elizabeth City State University Board of Trustees. In December 2017 he retired from Sanofi, a French-based biopharmaceutical company where he served as the company’s head of international policy. Hartsfield earned a bachelor of arts degree in chemistry from the University of North Carolina at Chapel Hill, and a law degree from Wake Forest University.

Mary Albritton Douglas: Douglas is a 1952 ECSU graduate who earned a Master’s Degree from Columbia University. She taught elementary and middle school for more than 30 years in Maryland and New York. A global traveler who has visited every continent except Antartica, Douglas has been a dedicated scholarship donor to ECSU since 2001. She stands as one of the top donors to the university and as a result, the theater inside the Walter N. and Henrietta B. Ridley Student Complex was named in her honor in 2009.

Dr. Paul A. Norman: A native of Roper, North Carolina, Dr. Norman is a 1981 graduate of ECSU, with a bachelors in business administration. He earned his Masters Degree in Counseling from North Carolina Central University, and his Doctor of Education from North Carolina State University. Dr. Norman has worked for more than 35 years in human services and higher education. He is a past president of the ECSU National Alumni Association, a former ECSU Mr. Alumni, has served on the ECSU Board of Visitors and Foundation Board. The UNC Board of Governors appointed him to serve as a member of the ECSU Board of Trustees where he served as vice chairman and chairman of the board.

Helen Muldrow: A native of South Carolina, Muldrow received a bachelor’s and master’s degree from Howard University. In 1947 her husband, William J. Muldrow, took a position at then Elizabeth City State Teachers College. It was here that Helen Muldrow would teach biology and zoology. Muldrow was the first person to commit to serving on the homecoming committee and propose the idea of having a homecoming parade. Between having four children from 1950 to 1959, Helen completed post-graduate work in the field of botanical ecology.  In the 1970s, she had an idea to start the first campus greenhouse, where the students could plant and cultivate their own lab seedlings. She also established an outdoor field-study laboratory. Located in the wooded area behind Bedell Hall Cafeteria, this laboratory gave many students in her class hands-on opportunities to study and record the developmental stages of a natural ecosystem. At 100 years old, she remains active on committees and is often seen at various campus events, including class reunions and other alumni gatherings. In 2014, because of their legacy of excellence in teaching and enduring support for ECSU, the university honored the Muldrow Professors with a street naming and dedication of the William and Helen Muldrow Way, located in front of the Marion D. Thorpe Administration, Building.

Dr. Ronald H. Blackmon: Dr. Blackmon graduated with a bachelors degree in Biology from Delaware State University.  He earned a Masters and Doctorate with specialization in Cell Biology from Howard University in Washington, DC. He completed post-doctoral studies in biochemistry and molecular biology at the USDA Research Labs in Gainesville, Florida. During his tenure of almost 30 years at ECSU, Dr. Blackmon has held several positions, including Provost and Vice Chancellor for Academic Affairs (2005–2008).  Among his many duties as a top administrator, he also served as the first chairman of the Board of Directors of Port Discover:  Northeastern North Carolina’s Hands-on Science Center, Inc.

Susie Sharpless Hodges: A retired educator whose career spans 35 years, Hodges is a 1965 graduate of ECSU, then known as Elizabeth City State Teachers College. One of five sisters who graduated from ECSU, Hodges has been a passionate supporter of her alma mater, working to raise funds for students and athletic programs. She has served on the ECSU NAA Board of Directors, and the ECSU Foundation. She is currently a member of the Viking Varsity Club Board of Directors. She gives generously to athletics and to the Benny O. Hodges Endowned Scholarship Fund, established in the memory of her late husband, an ECSU Football Hall of Famer and 1967 graduate.

Lt. Col. (retired) Tyron Wallace Eason: Eason graduated from ECSU in 1986 with a Bachelor of Science Degree in Geology, with a minor in Leadership and Management. He earned a Master’s Degree in Human Resource Management from Troy State University. His military education includes the United States Army Command and General Staff College and the Armed Forces Management School. Eason is an Iraq War veteran who has received numerous awards and decorations including two Bronze Star Medals. The Bronze Star Medal is awarded for heroic service in a combat zone. He currently serves as the Senior Army Instructor at Rocky River High School in Mint Hill, North Carolina. 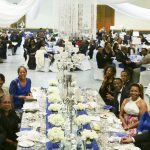