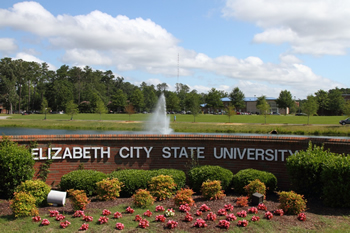 Elizabeth City State University is pleased to announce that U.S. News and World Report’s &quot2014 Best Colleges&quot ranked ECSU #1 among Top Public Schools (Regional Colleges/South). According to editors of the &quot2014 Best Colleges,&quot the Top Public Schools category includes public colleges and universities that are typically operated under the supervision of state governments. In addition, they are funded, in part, by tax dollars and subsidies from the state. As a result, these universities often offer free or discounted tuition to students considered residents of the state. Public schools run the gamut from small liberal arts colleges to large research institutions. These are the highest ranked public colleges and universities in the 2014 Best Colleges rankings, listed according to their ranking category.

The publication also ranked ECSU #18, among historically black colleges and universities. These historically black colleges and universities (HBCUs) were compared only with one another for these rankings. To qualify for the U.S. News ranking, an HBCU must be an undergraduate baccalaureate-granting institution that enrolls primarily first-year, first-time students and must be a school that is currently part of the 2014 Best Colleges rankings.

The university rose in both categories of 2014 Best Colleges. Last year the university ranked third among the &quotTop Public Schools (Regional Colleges/South) and #20 among HBCUs. ECSU Chancellor Charles Becton said the impressive ranking is very good news for current students and reassuring news for aspiring college students. Although many of ECSU’s students come from northeastern North Carolina, others come from across the state and nation to earn their degrees.

&quotElizabeth City State University is the premier educational, cultural, and economic entity serving northeastern North Carolina. Over the last 122 years, the university has been a beacon of hope for the students we’ve served,&quot Becton said.

&quotMany of our graduates remain in the state where they contribute substantially to the state economy. An affordable, public education at ECSU allows our students to become entrepreneurs, public servants, assorted professionals, and community volunteers who proudly serve North Carolina for decades.&quot

For details on the rankings, see http://colleges.usnews.rankingsandreviews.com/best-colleges/rankings/regional-colleges-south/top-public.