0
493 Views
Warning: json_decode() expects parameter 1 to be string, object given in /srv/users/serverpilot/apps/ecsunewsroom/public/wp-content/plugins/posts-social-shares-count/classes/share.count.php on line 66
0
Shares 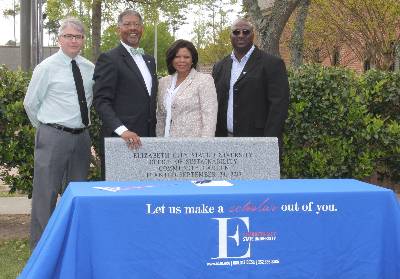 The observance of Earth Day was a good time for ECSU to make some new commitments and to reaffirm an old one. First, staff, faculty and students gathered to rededicate the Community Garden, which was originally established in 2012. The 14 ft. x 24 ft. wooden, raised bed was used to produce 1,100 pounds of fresh produce that was donated to the Albemarle Foodbank in 2013. Volunteers, students, and staff participated in growing the food. Reuse of the Community Garden is likely to begin within one semester. ECSU facilities staff are also considering revisions of the nearby garden space located between McLendon and Griffin Halls.

In addition, Dennis Leary, director of Facilities Management, announced the new ECSU Adopt-A-Spot Program which will begin within three months. It models the North Carolina Department of Transportation (NCDOT) Adopt-a-Road Program and will divide the campus into different areas. Groups, organizations and individuals can contribute to a series of beautification and gardening projects based on assignments from Facilities Management.

Last of all, the Earth Day observance included a signing of the Climate Leadership Commitment. The commitment states that ECSU will develop and implement a regional Climate Action Plan that addresses the following:

• Sustainability: defined as “Addressing the needs of the present without compromising the ability of future generations to meet their own needs accomplished by balancing economic, environmental, and social objectives.”

• Carbon Neutrality: The campus will be carbon neutral by 2050.

• Additional improvements to a current energy efficiency plan that has helped the university avoid nearly $5 million of energy costs over 10 years.

• Resilience: Resilience is the ability of a system or community to survive disruption and to anticipate, adapt, and flourish in the face of change.

• Emphasis on the section of the university ECSU Mission noting a dedication “to promote economic, social, and environmental progress for the people of northeastern North Carolina, the state, &amp the nation.”

• Creating a campus-community task force to guide the development of climate action plan.