0
5.9K Views
Warning: json_decode() expects parameter 1 to be string, object given in /srv/users/serverpilot/apps/ecsunewsroom/public/wp-content/plugins/posts-social-shares-count/classes/share.count.php on line 66
0
Shares

During the March 26 Board of Trustees meeting, Dr. Linda Hayden and Dr. Claudie Mackey were named professors emeritus for their outstanding, and ongoing, service to ECSU. Chancellor Thomas Conway presented the honors to the Board.

Dr. Hayden is the director of the university’s Center of Excellence in Remote Sensing Education and Research. A professor of mathematics, she has a 38-year history with ECSU.

Her work over the years has garnered her a great deal of praise from the national scientific community, as well as brought honors to ECSU. Thanks to the work of Dr. Hayden and her students, a bay in the Antarctic was named after the university in 2013.

A list of her achievements would take up pages and it seems, according to Chancellor Conway during his introduction to her honors at the Board meeting, she’s not done yet.

“She’s still writing grants. She is still one of our star performers,” he said.

He has also been a very active fundraiser for the university. Since 1991, Dr. Mackey has submitted proposals for funding exceeding $19 million. He has received grants funded from corporate, national, state and philanthropic agencies exceeding $7.6 million.

Dr. Mackey is currently serving as interim athletic director while a national search is conducted for the position. 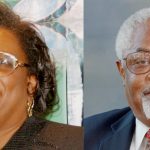