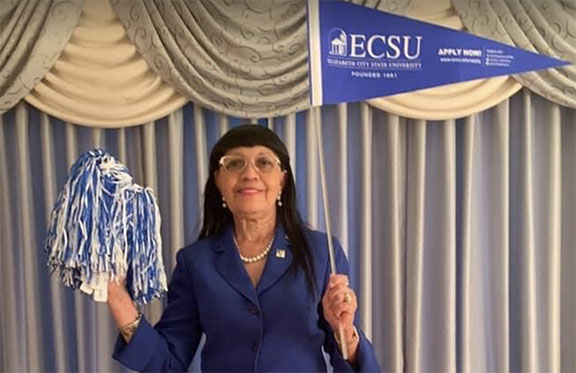 When Dr. Saundra Copeland met with her education students toward the end of their last semester, it was also the end her time as a professor at Elizabeth City State University, but that was by no means the end of Dr. Copeland’s lifelong Viking journey. The 1971 ECSU graduate is now celebrating her turn as Ms. Alumni after raising more than $60,000 in an effort to not only wear the coveted crown, but also help future Vikings on their higher education journey.

Dr. Copeland will officially celebrate her reign as Ms. Alumni Thursday at 6 p.m. in the K.E. Center during the alumni coronation event.

Dr. Copeland retired as an associate professor and former coordinator for the Master of School Administration Program at ECSU in 2019. Before returning to her alma mater as a professor, Dr. Copeland spent 31 years as an assistant principal and teacher for the Chesapeake Public School District in Virginia. During her time as an ECSU faculty member, she was the first runner-up recipient of the University of North Carolina Board of Governors Teacher of the Year Award, and the 2009-2010 Departmental Teacher of the Year.

In addition to her work as a school administrator and teacher, Dr. Copeland has worked to support children and families in the community with Early Works, Inc., National Silhouettes of Kappa Alpha Psi Fraternity, Inc., and Alpha Kappa Alpha Sorority, Inc. In 2005, under her leadership, the Portsmouth Chapter of Alpha Kappa Alpha received the 2005 Economic Development Challenge Award from the NAACP.

In 2006, Dr. Copeland was the recipient of the Safe Harbor Award in recognition of her efforts to improve the lives of children and families. That same year, on behalf of Alpha Kappa Alpha, she received the Stephen H. Clarke Academy Educator Appreciation Award for making a significant difference in the academic and social performance of their students.

In 2012, she was a recipient of the Portsmouth Chapter of Delicados, Incorporated Black Educators’ Award. In 2015, she was the recipient of the Portsmouth Chapter Silhouette of the Year Award from the Eastern Province Silhouettes of Kappa Alpha Psi Fraternity, Incorporated, and in 2018 and 2019, she was the recipient of the Valiant and Ivy Pearls Sponsor Award from Twenty Pearls, Inc., the Charitable Arm of the Gamma Delta Omega Chapter (Portsmouth, Virginia) of Alpha Kappa Alpha Sorority, Incorporated. In September 2019, Dr. Copeland was crowned Gamma Delta Omega’s HBCU’s Contest Queen. She served as captain of the Elizabeth City State University Team. 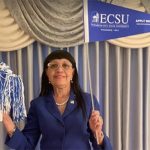