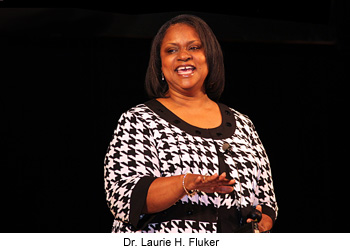 The Elizabeth City State University Division of Academic Affairs welcomed Dr. Laurie H. Fluker, associate dean of the College of Fine Arts and Communication at Texas State University-San Marcos, for the Spring Faculty/Staff Institute on May 9. The theme for the event was &quotPromoting a Climate for Academic Success.&quot Fluker is a tenured associate professor of mass communication who has served in a number of capacities during her years in higher education, including dean of communications at Austin Community College, special assistant to the president at Texas State University, and head of the broadcasting sequence at two higher education institutions. Having worked in practically every type of higher educational institution, she has insight and experience at both public and private, two-year and four-year, small college and large university, predominantly white and historically black, secular and church-related institutions. She received her bachelor of science degree in English and history from Wiley College and was the third generation in her family to have graduated from the institution. She holds a master of fine arts degree from Southern Methodist University in broadcast journalism and a Ph.D. in communications from the University of Texas at Austin. Fluker has been involved in a number of state and national organizations that address student issues. While serving three years on the state planning committee in Texas, she helped coordinate the Annual Conference on Recruitment and Retention for the Texas Higher Education Coordinating Board. She has served as state president and had multiple terms on the State Board of the Texas Association of Black Personnel in Higher Education. As a representative of the faculty, Dr. Fluker has recruited students for each institution where she has served. She remains involved with the students once they get to campus, through mentoring, student organization advising and teaching more than 800 students each year. Her intense interest and devotion to students can be documented by the dozens of &quotOutstanding Professor&quot awards that she has received from her students, student organizations and colleagues. Dr. Fluker is the author of &quotMastering Grammar, Spelling and Punctuation,&quot as well as a number of textbook chapters and reports. She is a highly sought-after motivational speaker who has given inspirational keynote addresses and conducted workshops for professionals and students across the country for more than 20 years. She has contributed countless hours to civic, statewide and national committees and taskforces. She has been honored seven times nationally by six of the nation’s most prestigious broadcasting organizations through nationally competitive fellowships. Dr. Fluker also has been recognized by university, state and national organizations for her work as an outstanding educator.