Dr. Kingsley Nwala appointed as Dean of the School of Business and Economics

0
604 Views
Warning: json_decode() expects parameter 1 to be string, object given in /srv/users/serverpilot/apps/ecsunewsroom/public/wp-content/plugins/posts-social-shares-count/classes/share.count.php on line 66
0
Shares 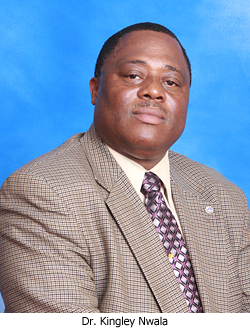 Kesha Williams
July 22, 2013 Dr. Kingsley Nwala has been appointed as Dean of the Walter R. Davis School of Business and Economics at Elizabeth City State University (ECSU). He served as the interim dean for the ‘School of Business and Economics during the 2012 – 2013 academic year and has previously served as chair of the Department of Business Administration and of the Department of Accounting (formerly Accounting, Economics and Finance). Nwala holds a Ph.D. in economics from Howard University in Washington, D. C. and he earned his master’s and bachelor’s degrees from the University of the District of Columbia in Washington, D. C. Prior to joining ECSU, he served as an economic analyst with the U.S. Congressional Research Services in Capitol Hill, Washington, D.C. He also has previous experience as a banker. Nwala has an extensive number of publications related to economics and direct investment. He also taught at Howard University. Nwala served several years as a faculty research mentor for students enrolled in the Ronald E. McNair Postbaccalaureate Achievement Program at ECSU. He chaired several committees within the ‘School of Business and Economics and committees at ECSU. His research interests are economic growth, monetary and fiscal stabilization policies, and foreign direct investments. Nwala has over 15 years of experience in teaching and administration in higher education. # # #

Dr. Kingsley Nwala appointed as Dean of the School of Business and Economics