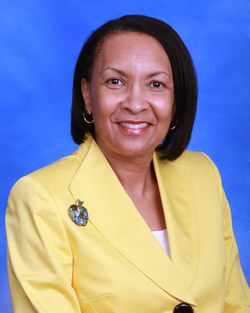 Dr. Flora Brown, an ECSU faculty member and administrator for the last 24 years, has been named as interim vice chancellor for Academic and Student Affairs. She replaces Dr. Ali Khan, an ECSU faculty member and administrator, who recently announced his phased retirement after 34 years. Brown’s most recent position was director of Assessment and Accreditation (2013-2014), allowed her to lead a team of faculty and staff in achieving reaffirmation of the university’s accreditation with the Southern Association of Colleges and Schools. Other posts included special assistant to the Chancellor for Assessment (2011-2013), director of SACS Compliance and Reaffirmation (2008-2011) and chair for the Department of History and Political Science (2003-2008). She will be responsible for all academic programs, academic administration, and student affairs’ units including admissions and financial aid. Brown said she is committed to serving the students, staff and faculty to work collectively to achieve the university’s goals. Brown, a native of Columbia, North Carolina, arrived at ECSU in 1990. She holds a Ph.D. in American History from the University of South Carolina, a M.A. in American Social History from UNC Greensboro, and a B.A. in History and Government from St. Augustine’s College. She is married and has one son.